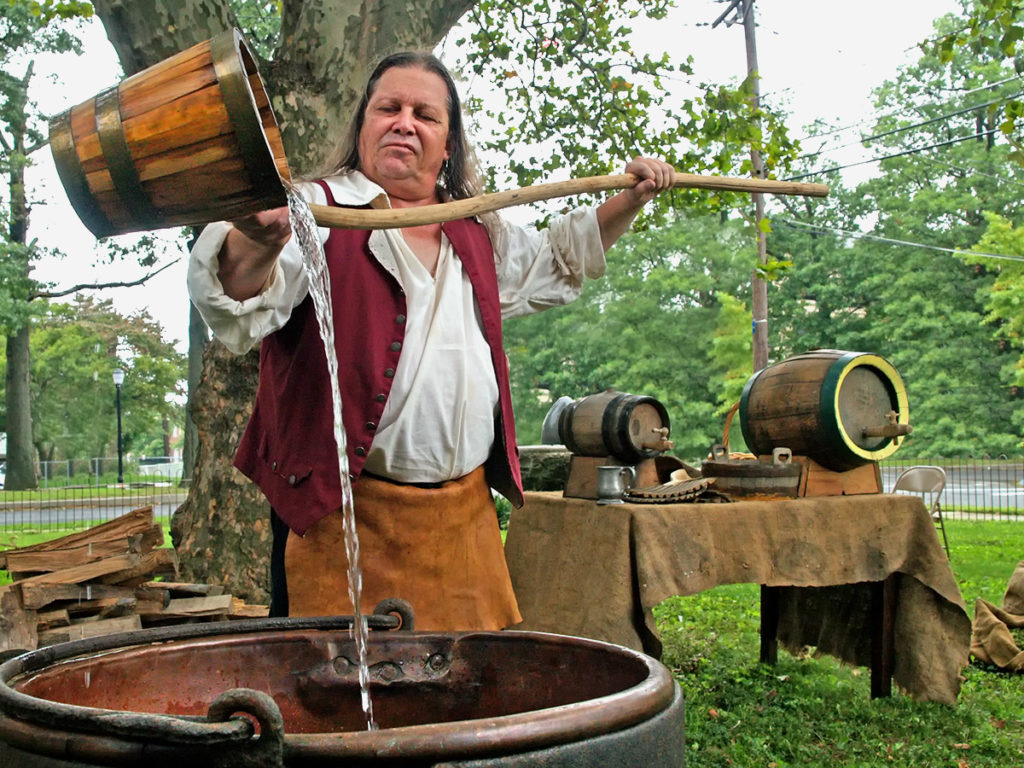 A bear of a man with hair to his shoulder blades, Hatboro, Pa., resident Richard Wagner is a beer historian who dresses in garb that would have been worn by a typical 1750s itinerant brew master -- the craftsmen whose horses and wagons carted a mini-breweries from farm to farm. Here, in a Camden, NJ, appearance, Wagner demonstrates the Colonial beer making process. 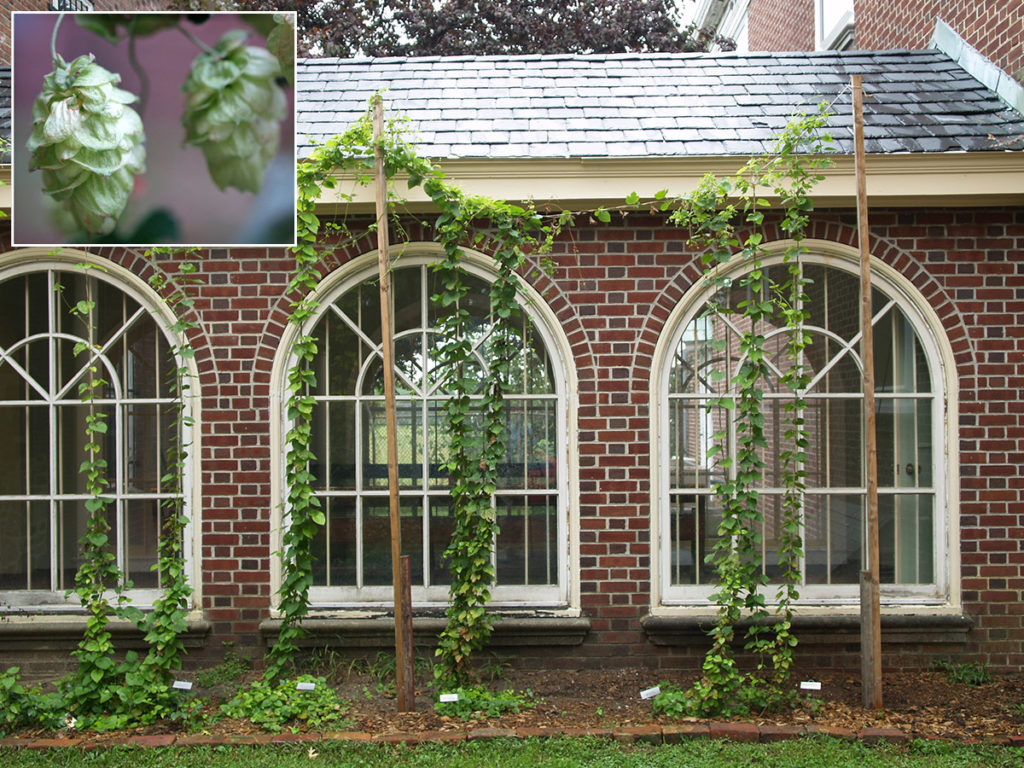 Camden's 18th-century mansion, Pomona Hall, planted a crop of hops that grew on a stringed trellis and were ready to harvest for Wagner's beer making event. Hops are a flowering vine whose fruit resembles tiny, soft green pinecones. Each contains a sticky yellow resin-like substance that has been used as a preservative and flavoring in the brewing process for nearly a thousand years. 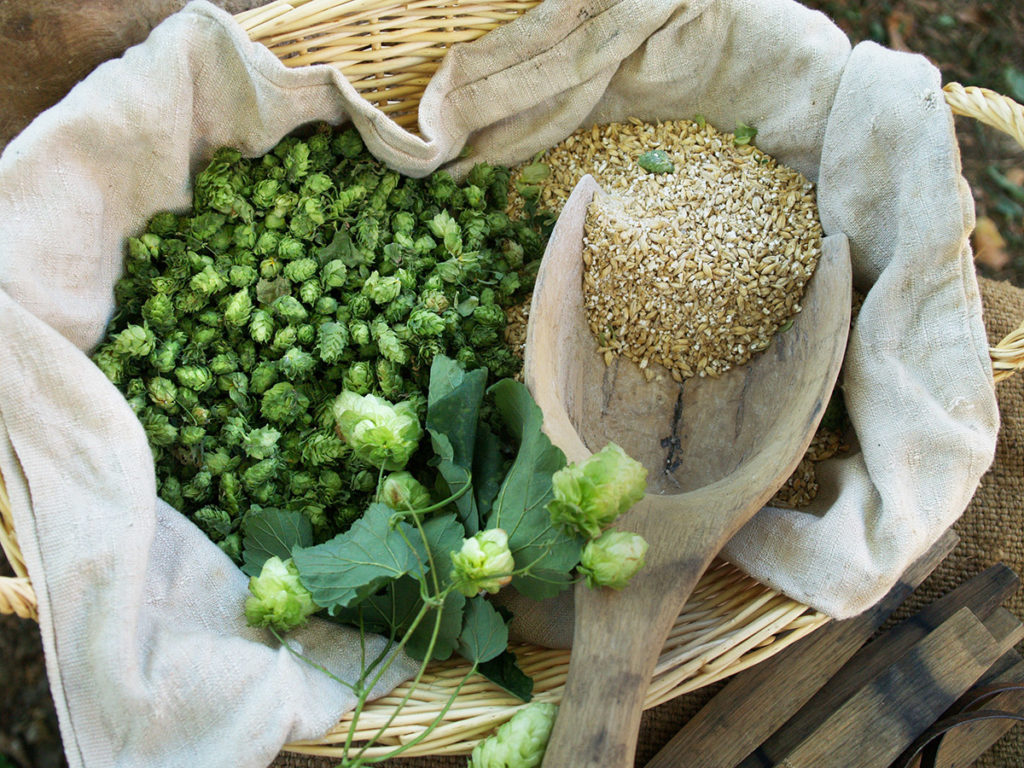 Hops and barley grain were major 18th-century crops and crucial ingredients in beer making. Wagner is a nationally recognized authority on all aspects of this process and author of the book, "Philadelphia Beer History." 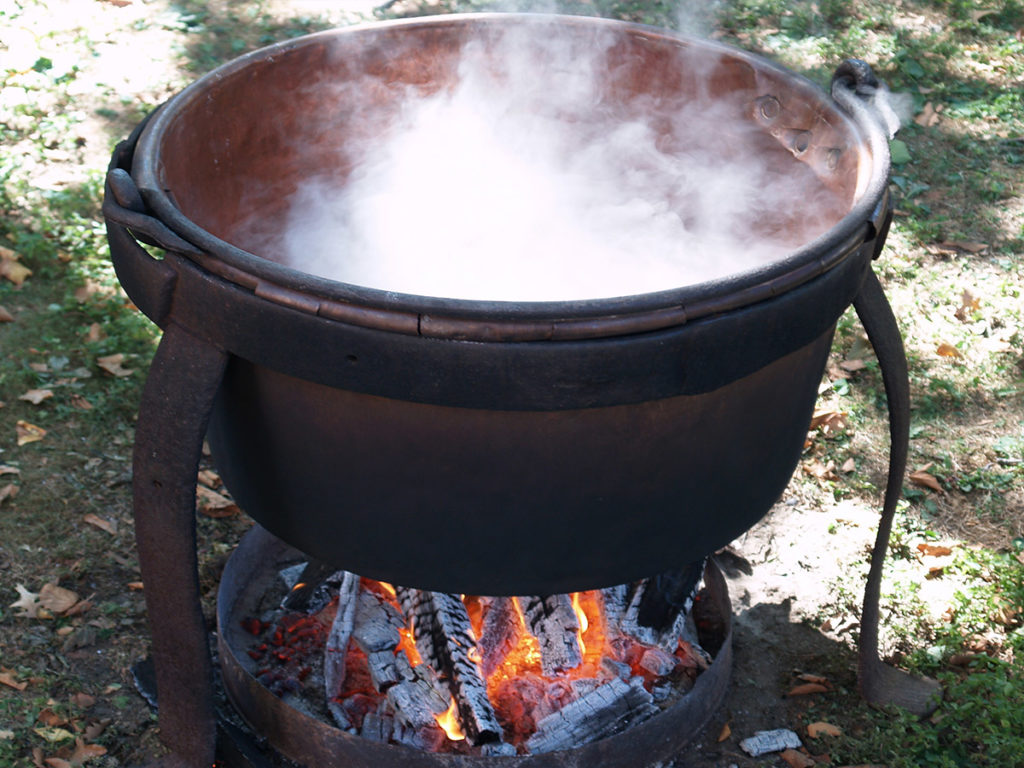 In a hand-made copper kettle above a roaring wood fire, the water is brought to near boiling. "I don't use modern instruments to measure anything," Wagner explained. "Everything is based on the way things look or feel at certain stages. I time things by using the movement of the sun -- 15 degrees an hour." 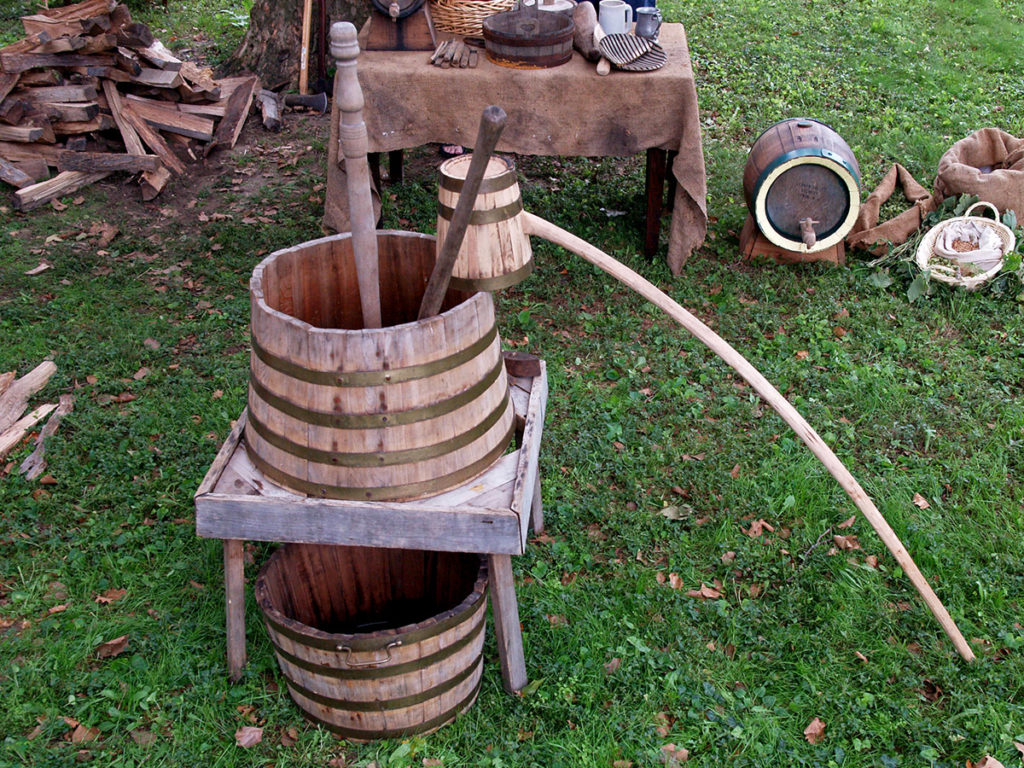 Wagner has been studying the history and methods of beer making for more than forty years. That history goes way back. When William Penn landed in 1682, one of his earliest acts was to appoint the settlement's first brew master. Then, he built a brew house at his Pennsbury Manor, twenty miles up the Delaware River from the Philadelphia. 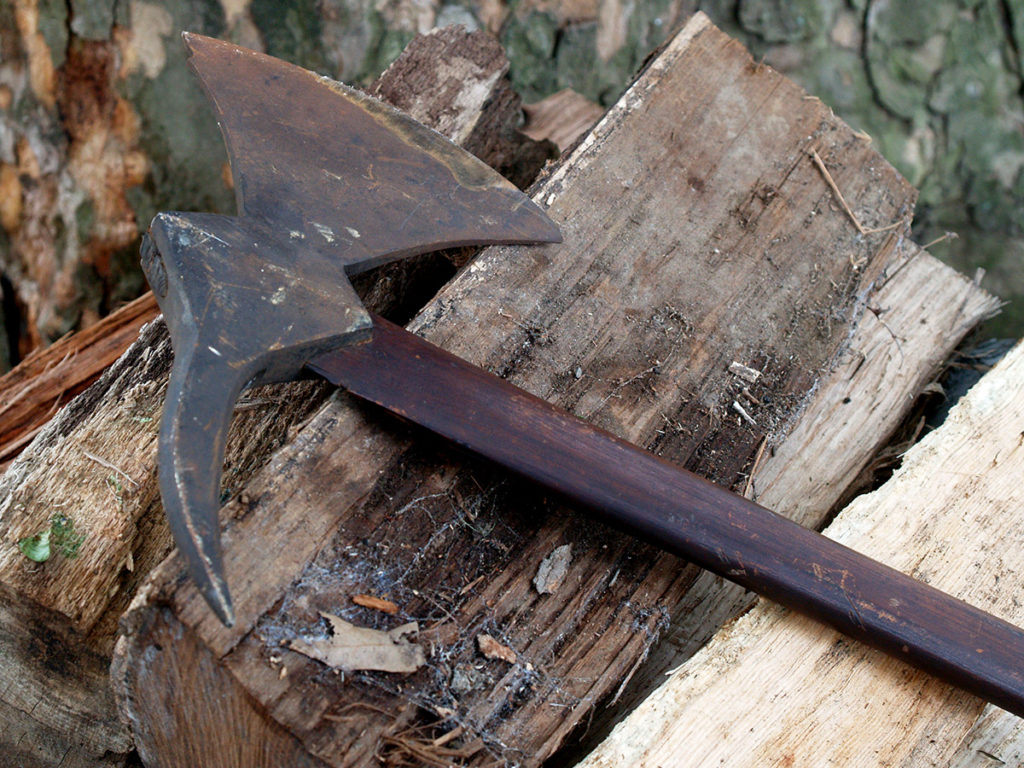 Tools of those times were crude but effective. Wagner spent the early part of the morning splitting logs for his kettle fire with an 18th-centuryt axe. 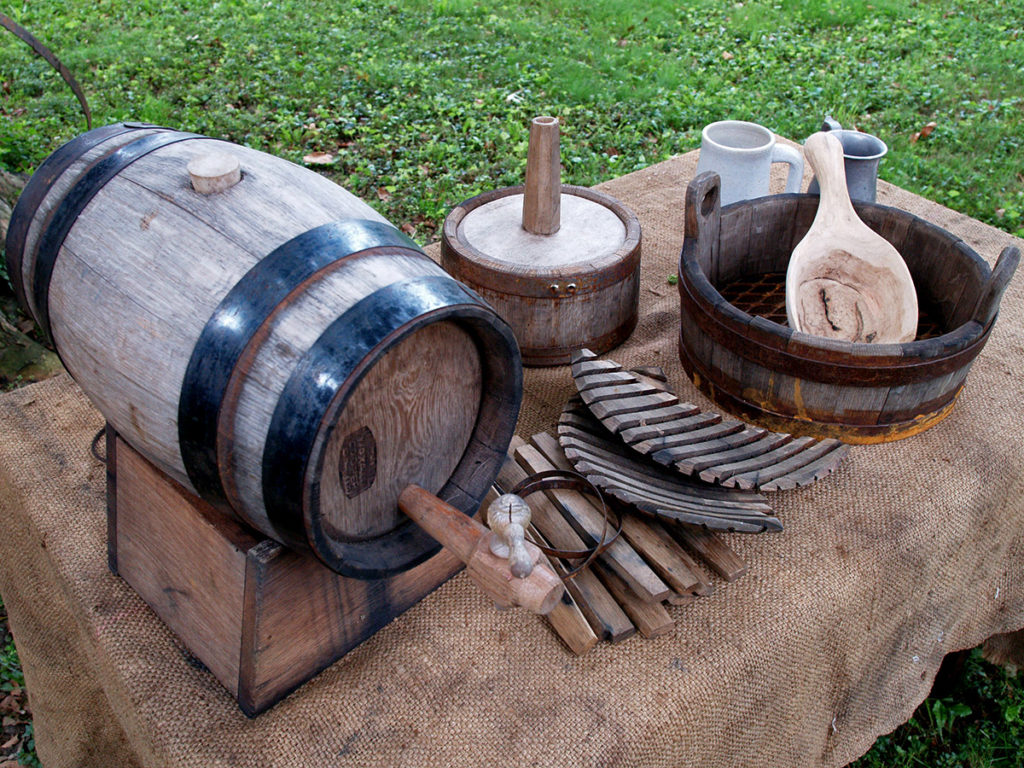 All equipment used in Wagner's demonstrations is hand made. "I worked with a cooper for eight months to make everything just as it would have been made back then," he said. "We carved the ladles from naturally-occurring tree burls and, during the winter, I'm always studying my firewood to find pieces shaped just right for certain implements," he said. 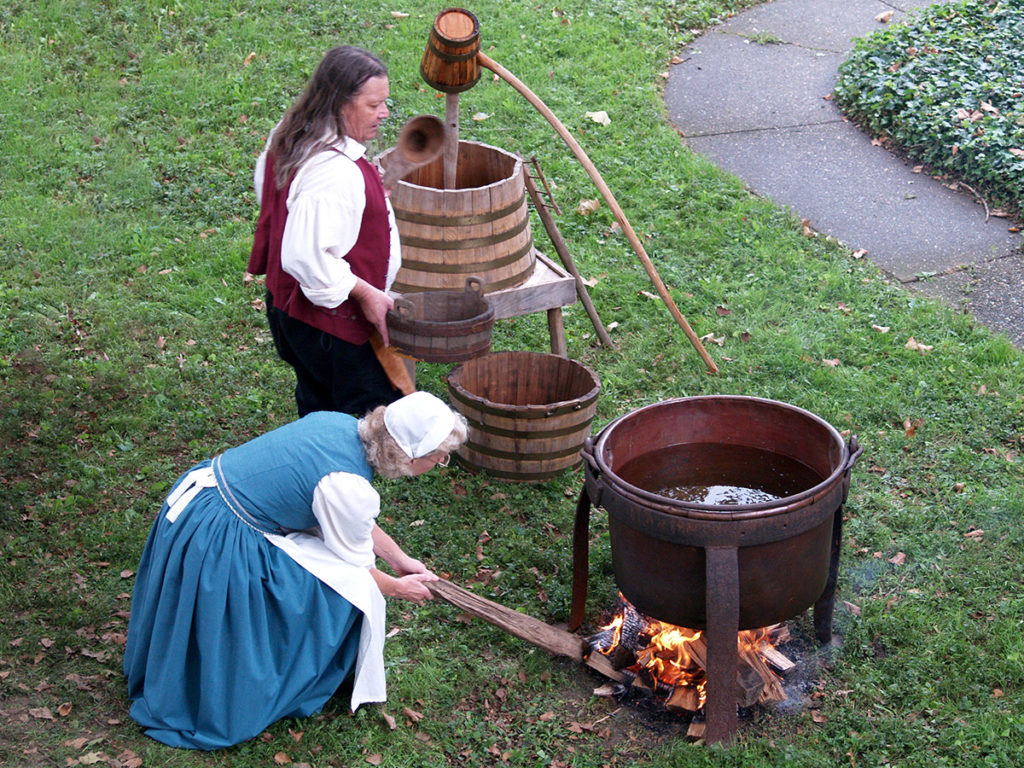 Wagner travels with a self-contained mini beer factory of the sort that was used in the 1600 and 1700s when beer was routinely consumed daily by adults as well as children, even at breakfast. "Most women back then had to know how to make beer because it was just expected that every wife would feed her family with nourishing beer," said Wagner. "This was as important a domestic craft as cooking soup, tending a kitchen garden or spinning yarn." 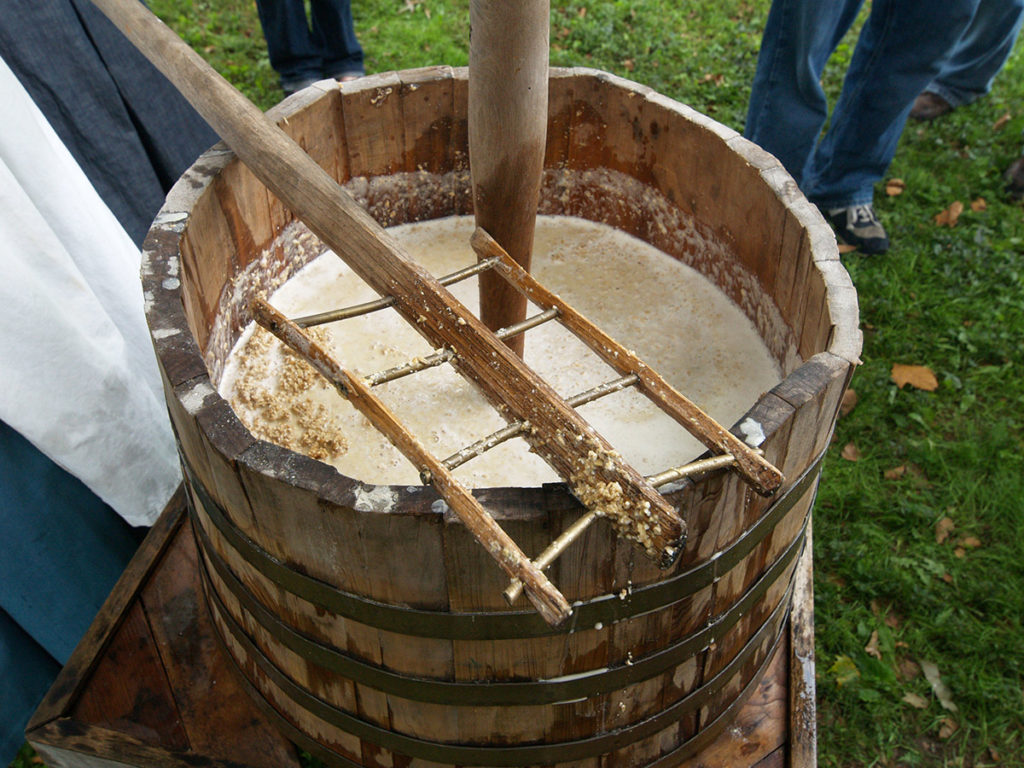 Once the kettle of water is almost boiling, the pulverized hops and malted barley are added to the mash tub where a special rake is used to mix them into a porridge-thick "wort" into which yeast is later added to begin the fermentation process. 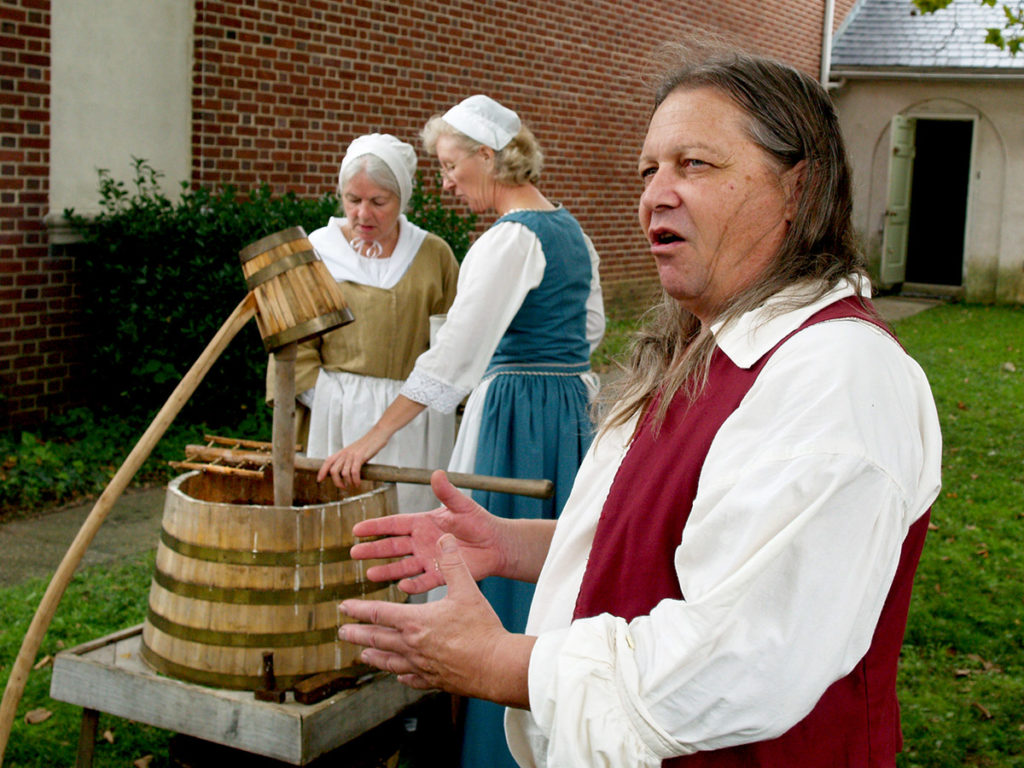 In the 1700s, the average American Colonist consumed more than twice the amount of alcoholic beverages today's people drink, with most of that being beer, Wagner explained. Locally grown hops supplies weren't enough. The Pennsylvania Gazette reported that during the year 1791, Philadelphia merchants took delivery of a total of 20 tons of hops from vessels inbound from Boston alone. 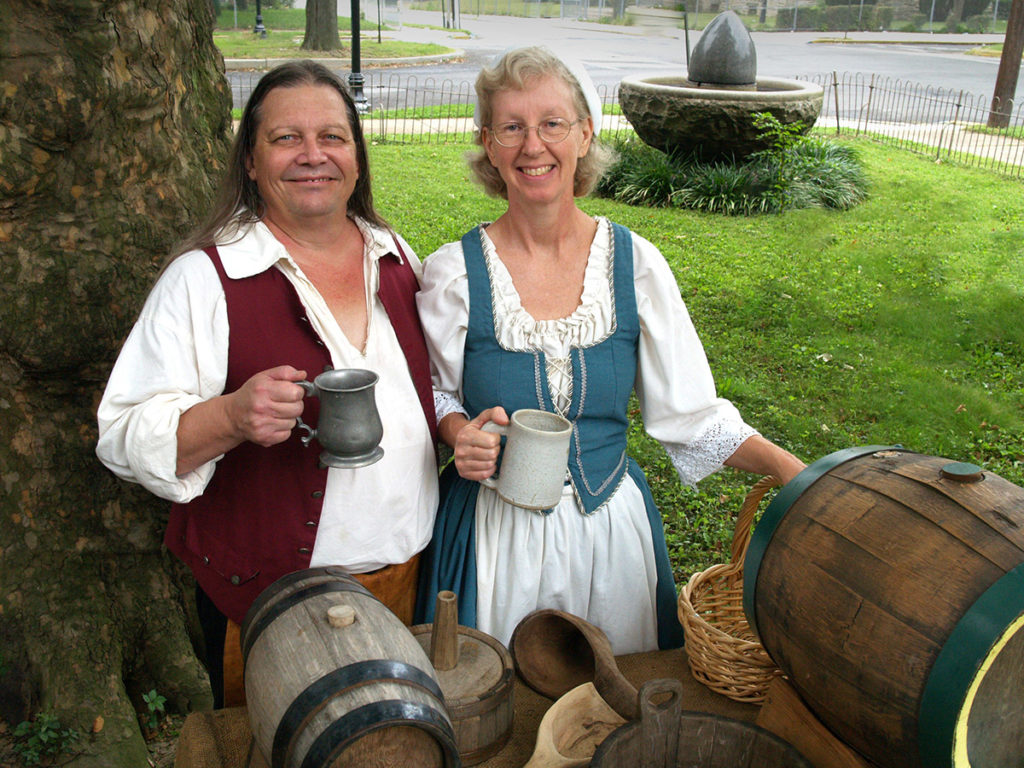 Wagner and his wife Ann pointed out that beer played a central role in the social, economic and political life of Colonial life. It provided daily nutritional sustenance, was made from the crops that they grew and bought and sold in huge quantities. And, it was the key lubricant in the networks of local taverns that were the culture's primary social and political venues.