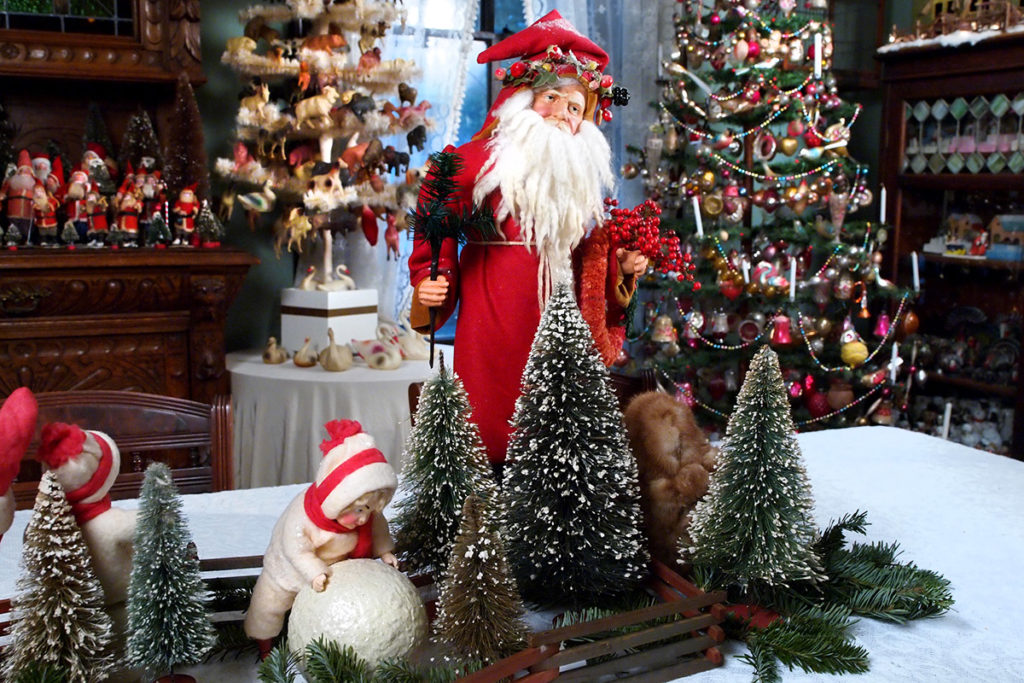 In the center of the dining room table is a Father Santa figure with a beard made of dyed tufts of wooly buffalo fur. In the lower left corner, a Vinter Kinder, or Snow Baby, rolls a snowball that is actually an antique candy container.

For decades before her retirement, Haddonfield, NJ, artist Yvonne Carpenter annually revamped her entire house in December, turning it into a Christmas wonderland and a showcase for the creations she made and sold through her company, Snickels & Kringles. The home also served as a vertible museum of Christmas-related art and antiques from the U.S., Japan and Europe. “The material culture and arts of Christmas connect us to this sense of a better time,” said Carpenter. “It’s remembered as an easier time, a time when families were closer and communities came together in joyous celebration of the same values and traditions. And we’re losing that. Maybe the more enchanted time we remember never really existed, but even if it’s only in our heads, its a powerful pull continues to bring us together. I loved being part of that.” See the accompanying text story of Carpenter’s company and career. 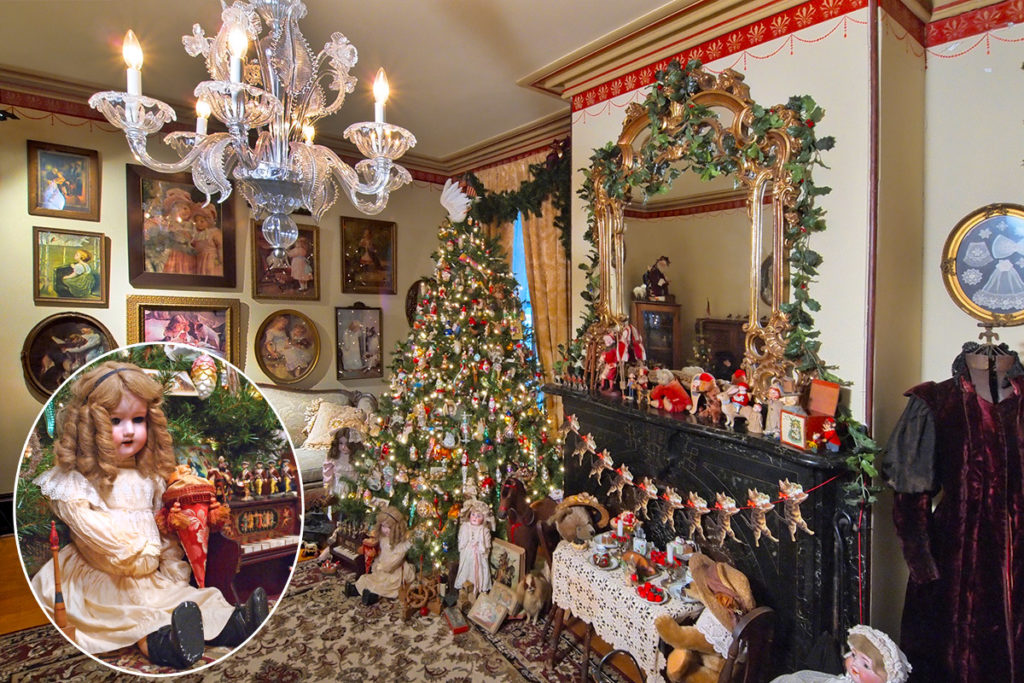 In the Victorian room, the tree -- one of 14 throughout the house -- is hung with 19th-century antique ornaments and surrounded by collections of antique toys of the same period, including the bisque doll from Germany. 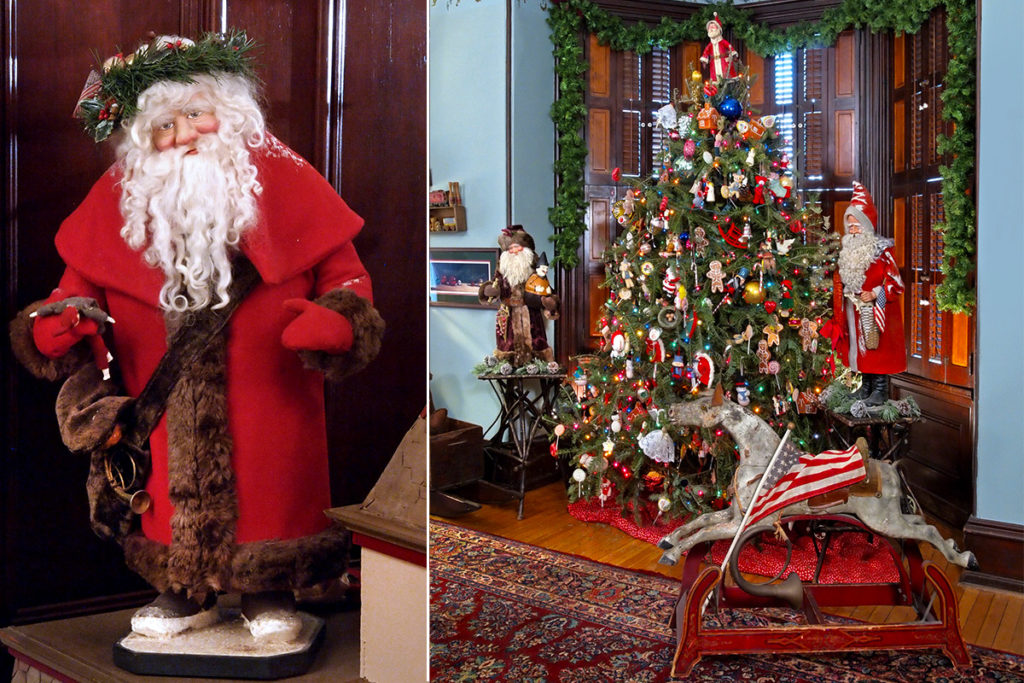 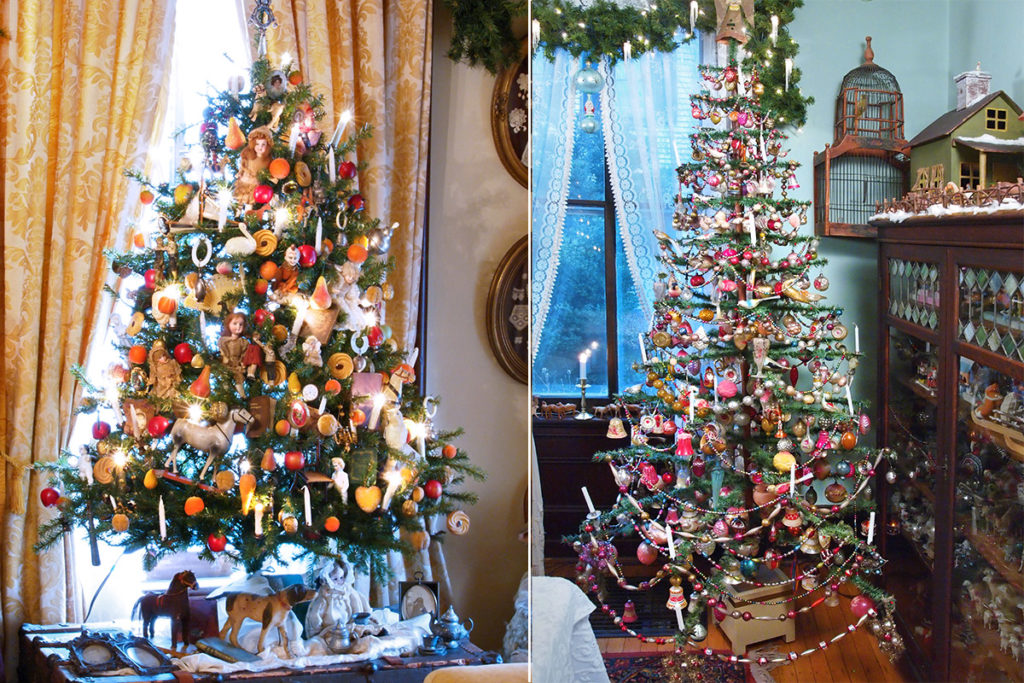 Two other trees of note include the "Prince Albert" tree hung with decorations similar to those used by Britain's Prince Albert, who helped define the modern era's Christmas traditions in the 19th century. On the right is an antique feather tree -- one of the first methods used to create artificial trees. 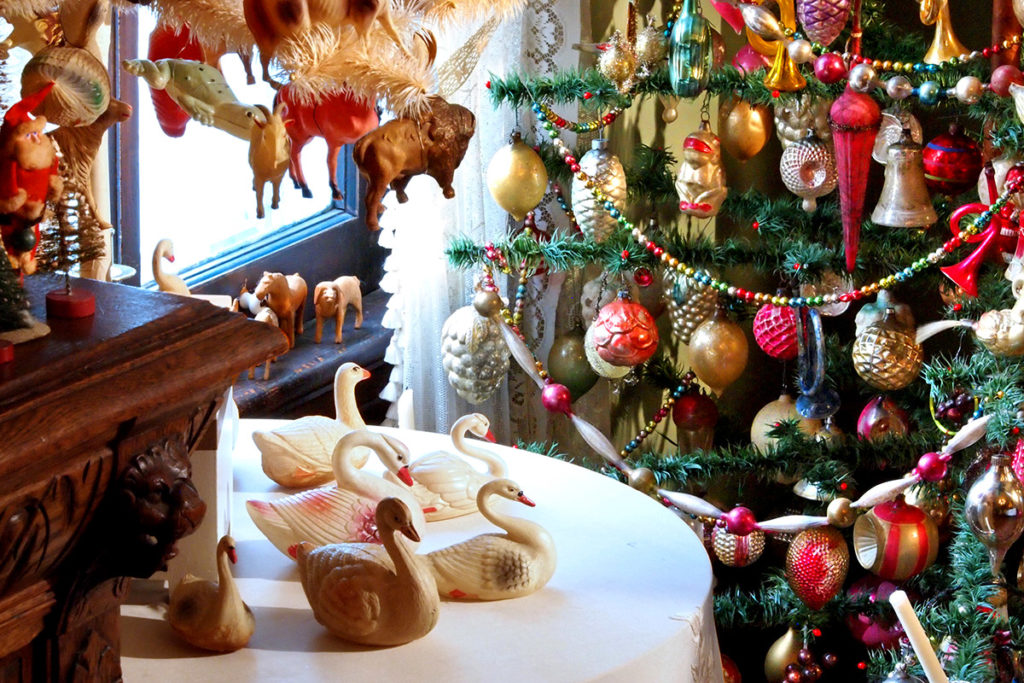 There is no nook or cranny throughout the Carpenter home that is not filled with surprises, like this scene with antique celluloid 7 swans-a-swimming across a table below other animal-shaped celluloid tree ornaments. 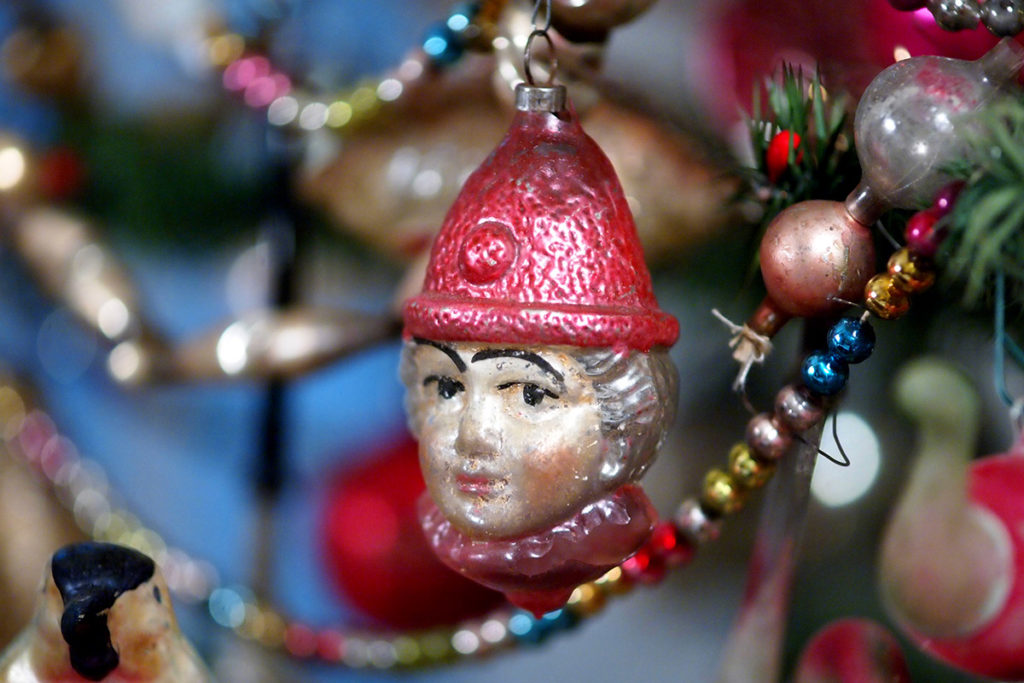 Among the most valuable items in Carpenter's collection are hand-made 19th-century glass ornaments from Germany. This one, a circus clown face, is extremely rare because the blown glass is so thin and delicate that few survived. The strings of beads are also antiques of blown German glass. 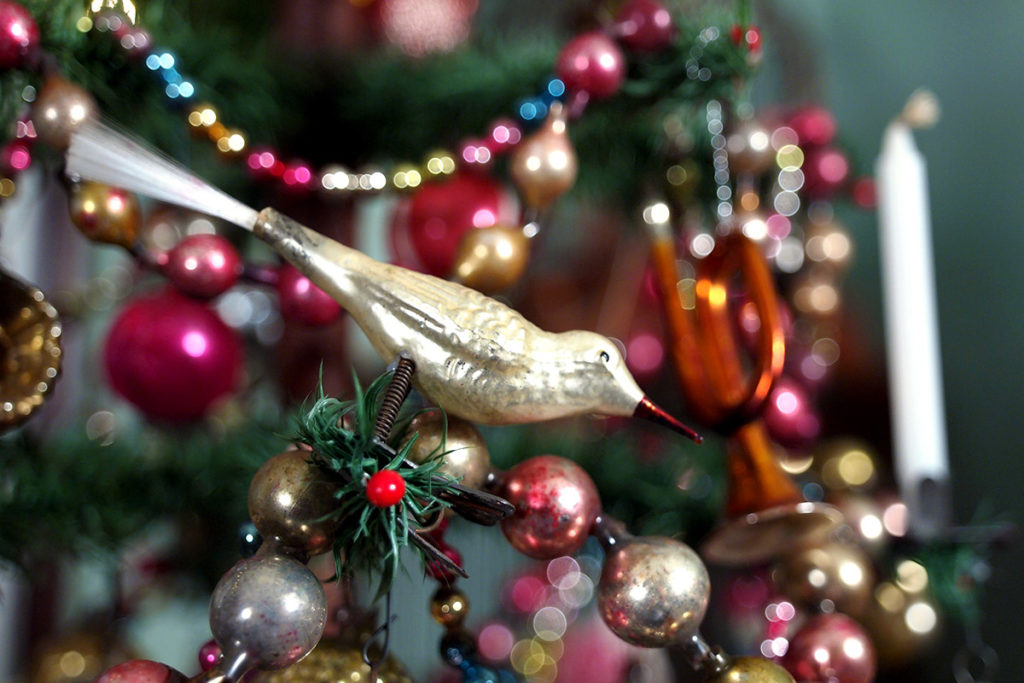 Antique German glass bird ornaments are also rare. Their tails are made of blown glass strands, which is why most bird ornaments like this are found without their fragile original tails. 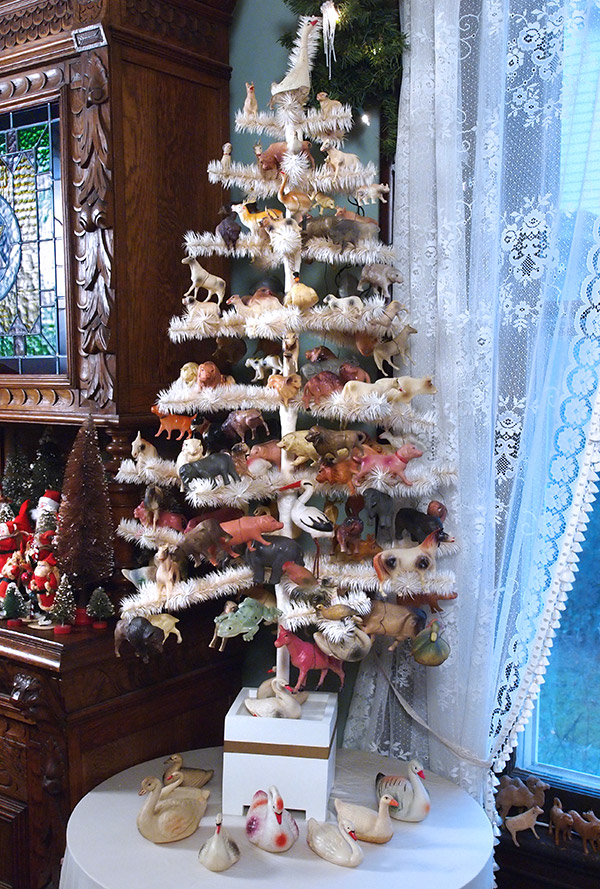 German artisans first pioneered the concept of artificial trees with wooden dowel trees filled out with white feathers to resemble snow-covered boughs in a forest. 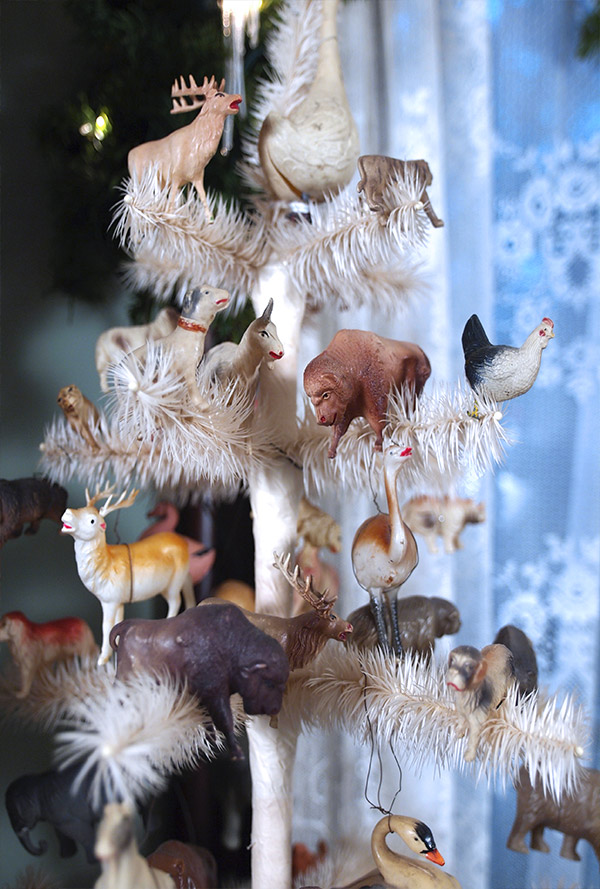 Celluloid, one of the first plastic materials, and was particularly useful for Christmas ornaments in the opening decades of the 20th century. Celluloid is, however, extremely flammable and was banned from the manufacture of toys in the 1930s after a series of awful home accidents. 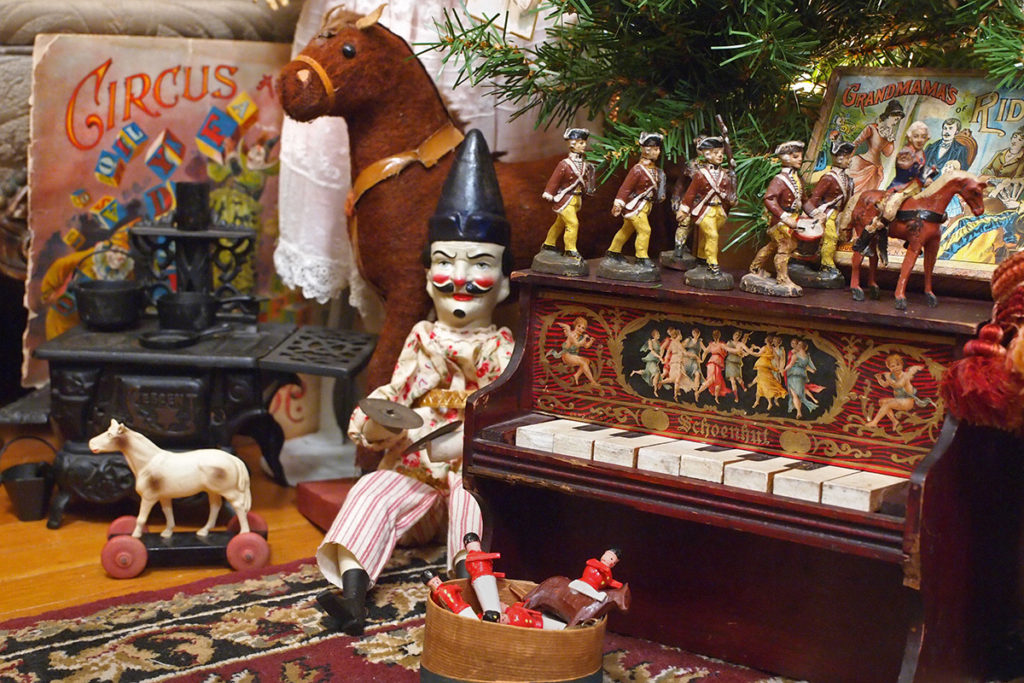 In one of the many antique toy displays throughout the house, this miniature piano is a Schoenhut guarded by composition British soldiers marching across its top. 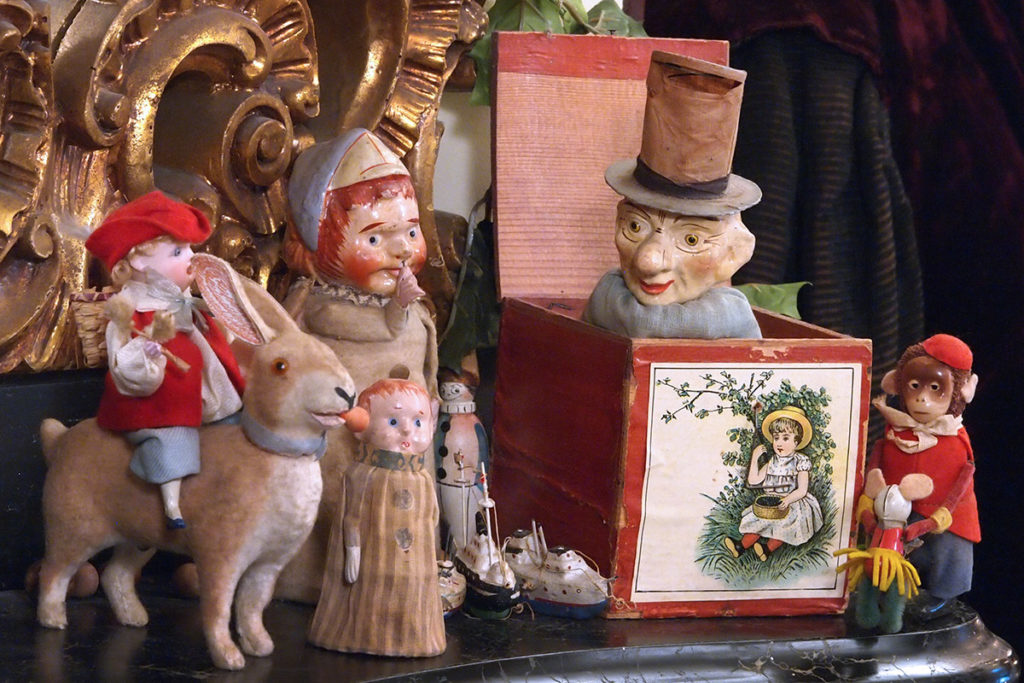 Atop the mantel of the Victorian room's fireplace is a cluster of antique toys from the late 1800s, including a jack-in-the-box and a child figure riding a rabbit. 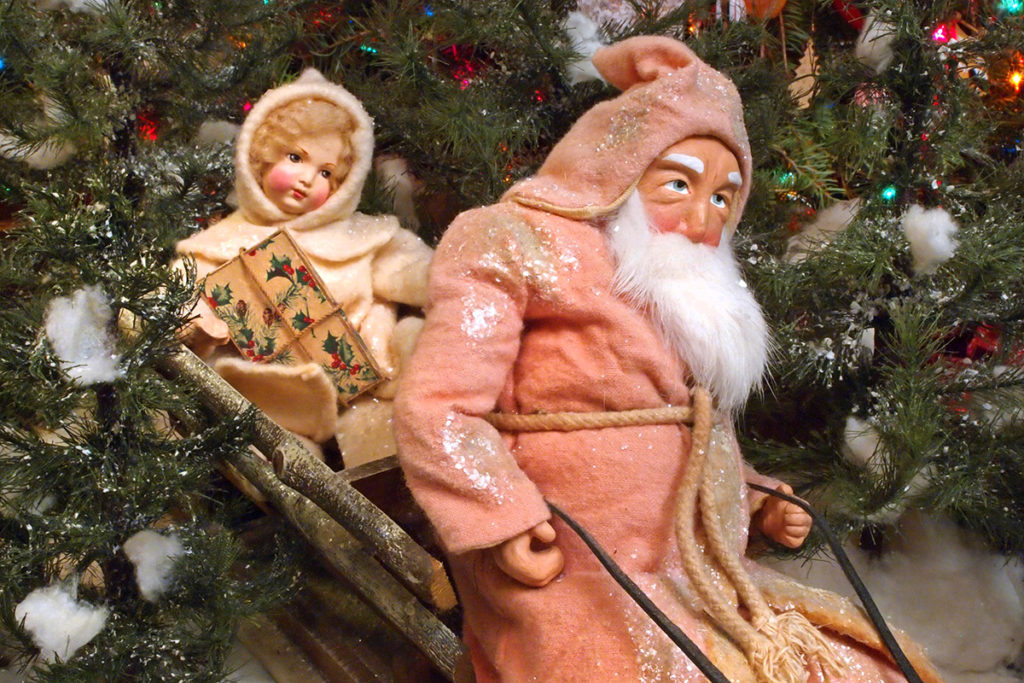 Driving an antique wooden wagon across the living room floor is a Carpenter Santa figure with girl doll behind. The Santa beard is rabbit fur and his coat and hood are dyed heavy flannel. The girl doll's hair is lamb's wool. 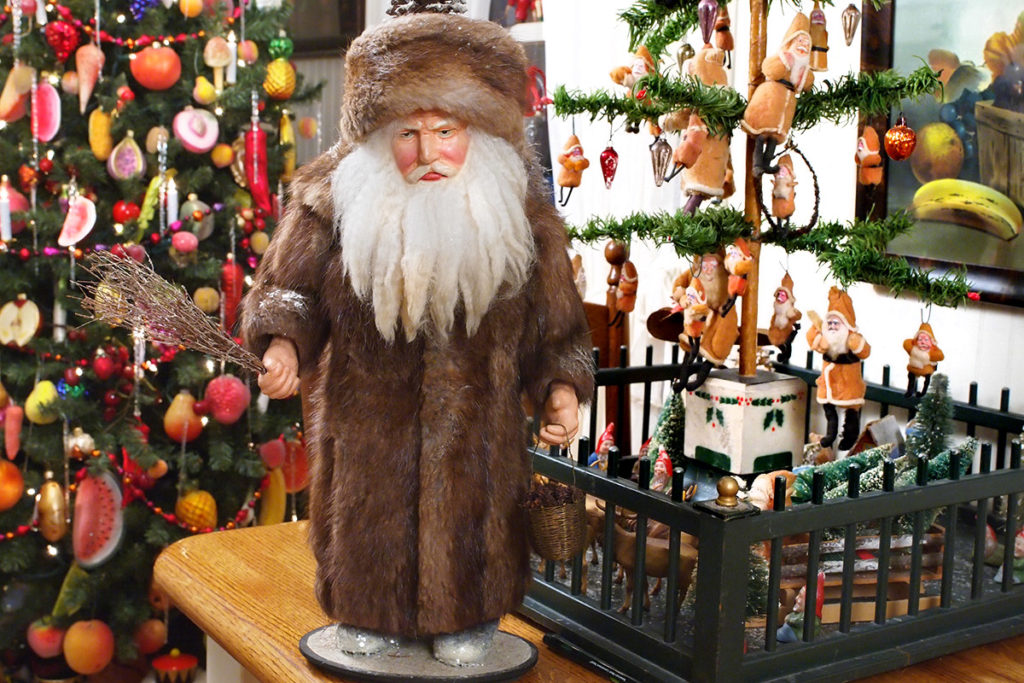 In the kitchen is a Carpenter Belsnickel in a hat and coat made of mink. The belsnickel character evolved from European holiday traditions. He was a crotchety old man with candy in his pocket and a switch in his hand to reward or punish children for their behavior during the past year. 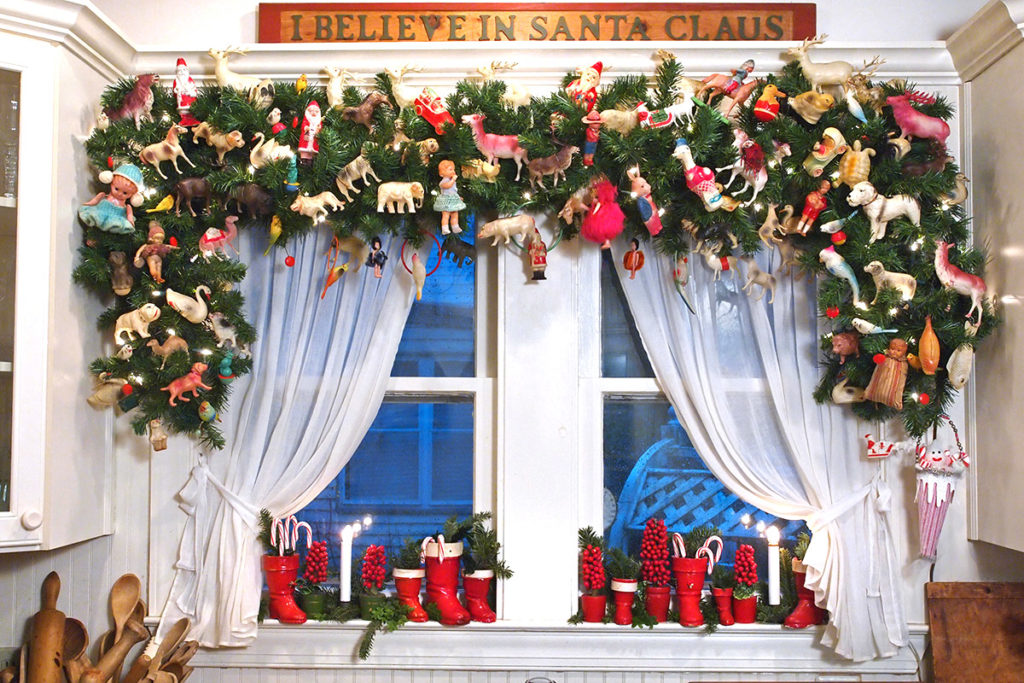 In the kitchen, a heavy garland of pine is festooned with a collection of antique celluloid toys that took 30 years to accumulate. 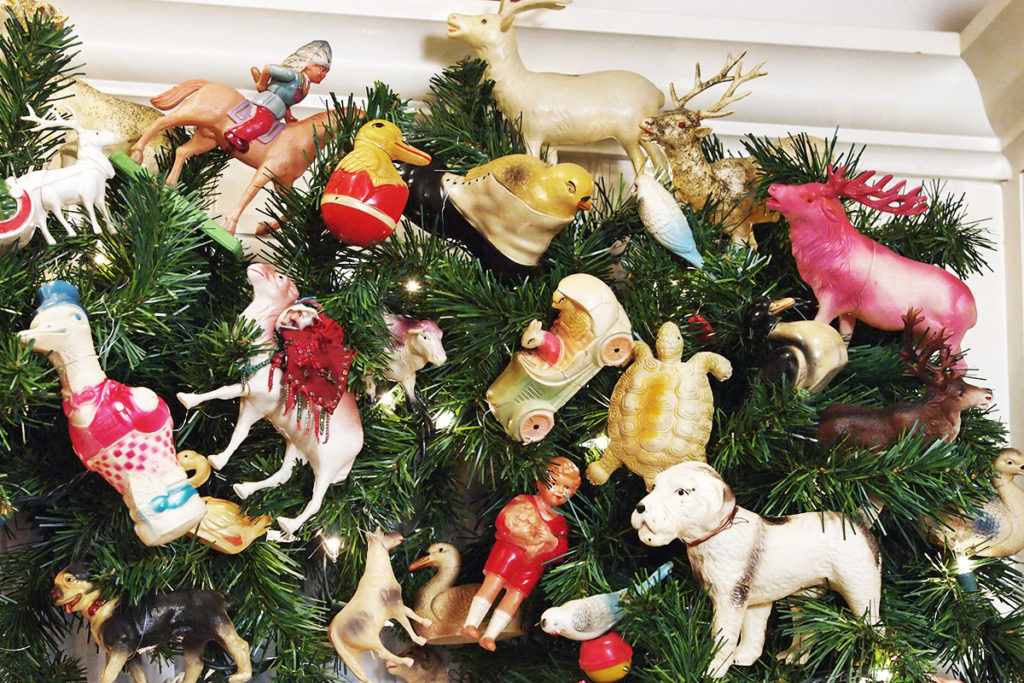 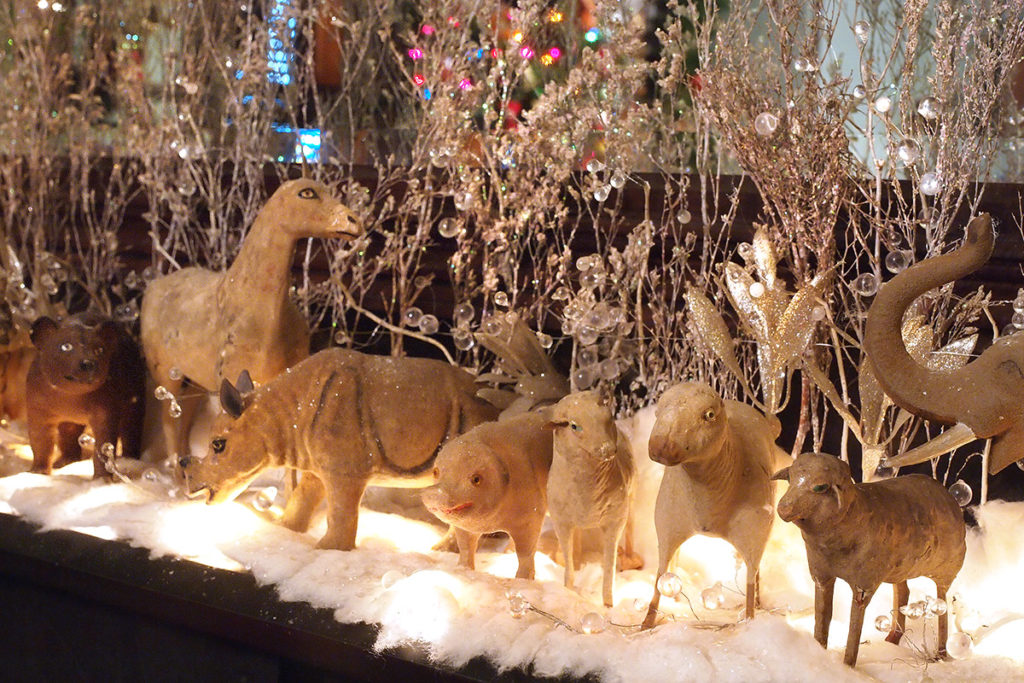 Among the most unusual items in the Carpenter Christmas collection is this herd of 19th-century German animals grazing across the living room mantle. Their bodies are made of a sawdust and glue composite; their legs of carved wood. 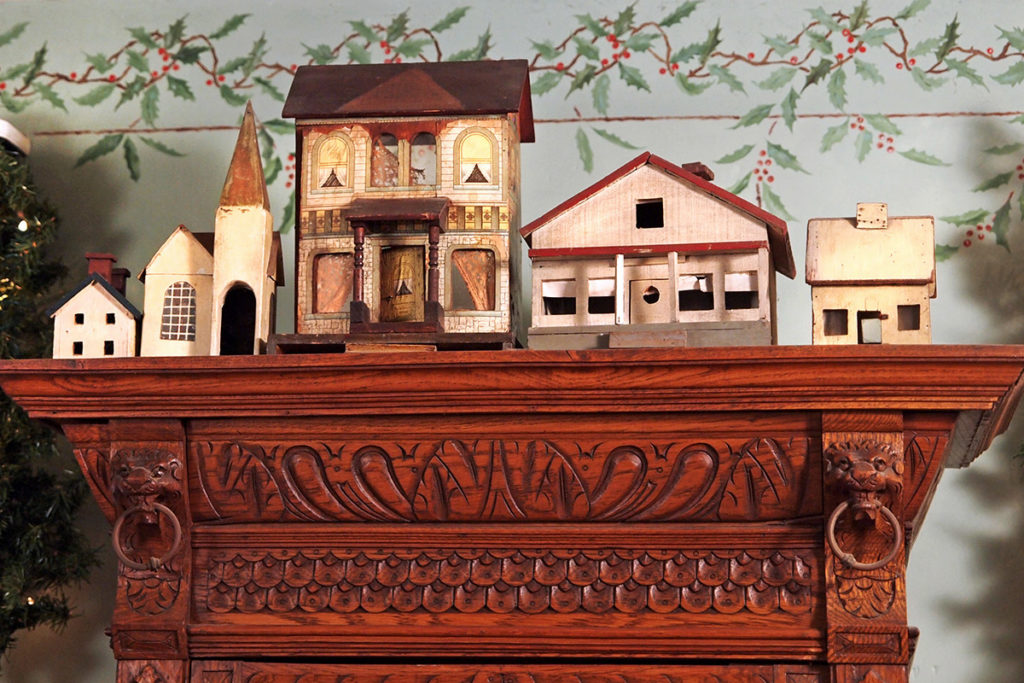 Even the walls of the Carpenter house are stenciled all around with designs of pine and holly boughs, here framing items from her collection of tiny antique doll houses and German Christmas "putzes" or miniature village houses.