This 20-foot-high praying mantis is part of David Rogers' "Big Bugs" exhibit at the Morris Arboretum in Philadelphia.

Since 1994, Long Island woodworker and sculptor David Rogers has been wowing audiences in arboretums, nature centers and botanical gardens across the country with his menagerie of dinosaur-sized insect sculptures. Made from all natural materials, the bugs’ size is suggestive of those 1950’s horror movies about gigantic mutant insects created by atomic bomb fallout. Here, Rogers’ exhibit stretches across the 92 acres of the heavily wooded arboretum in the Chestnut Hill section of Philadelphia. 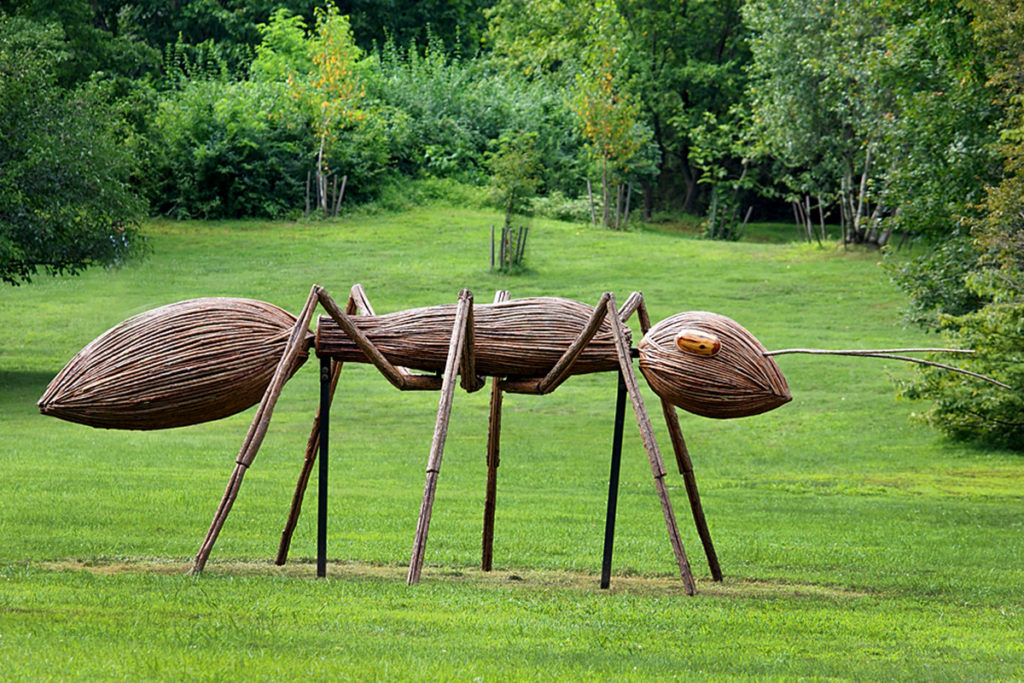 Now 60, Rogers began making small insect sculptures out of junk auto parts when he learned how to weld as a teenager. He went on become a carpenter and furniture maker who, in 1983, watched a colleague fashion chair parts from bent cottonwood saplings. 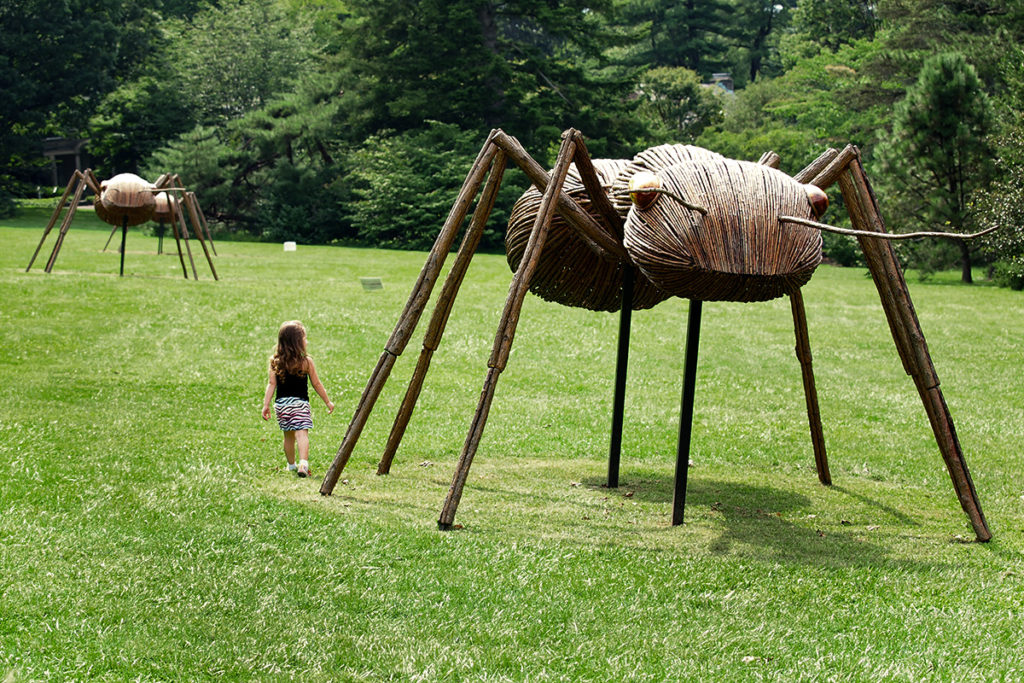 He began making furniture the same way, with the bark left on, and years later, used the same idea to lash together his first gigantic creature creations from willow saplings and other materials gathered from the forest. His ants (above) are 25 feet long with eyes carved from red cedar. 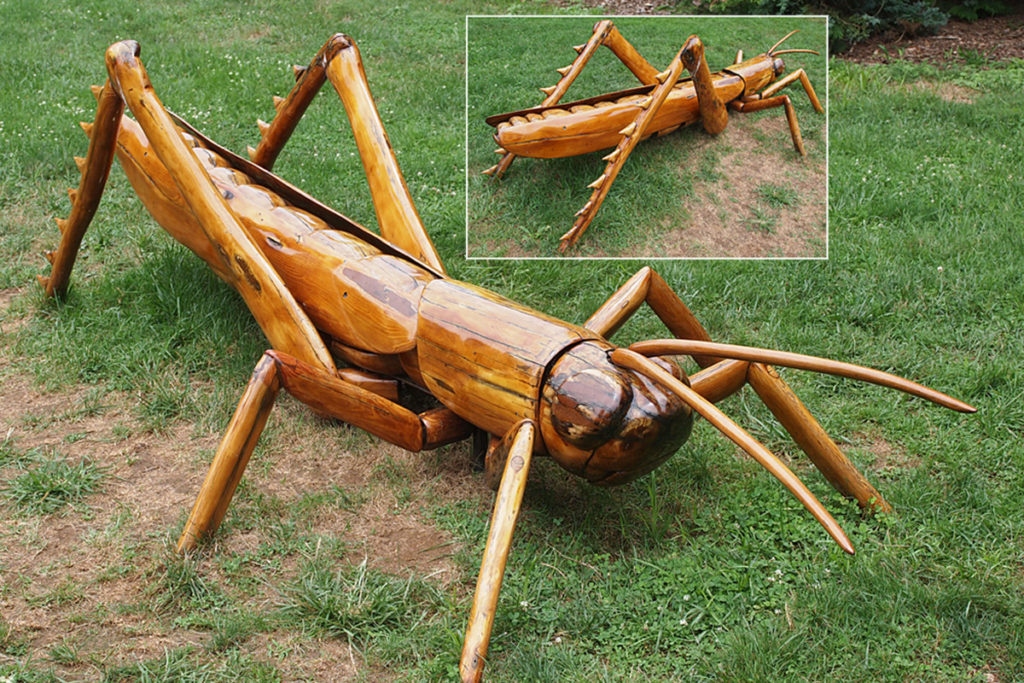 Rogers' first Big Bugs show at the Dallas Arboretum in 1994 pulled in large audiences and drew the attention of botanical garden facility managers across the country who were always looking for crowd-drawing exhibits resonant with their conservation ethos. His work was a perfect fit, featured coast to coast in places like the U.S. National Arboretum in Washington, Disney World's Epcot Center, and the New York Botanical Gardens. 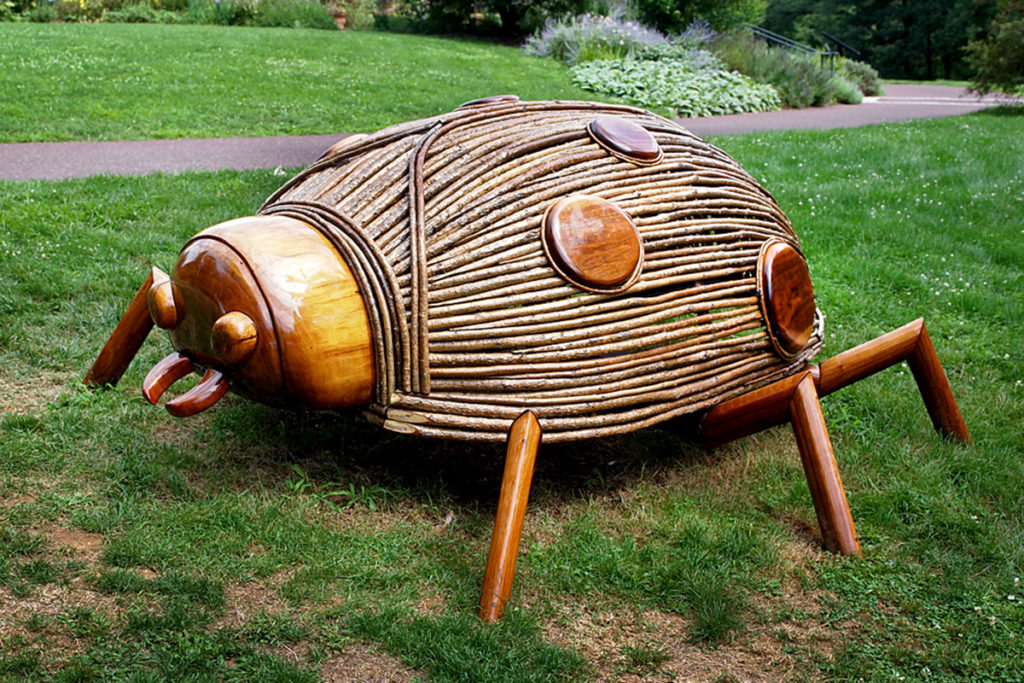 The seven-foot long grasshopper carved from black walnut` (above, left) and six-foot-long ladybug (above, right) include sculpted wooden parts as well as bent willow. Far from being just an artist, Rogers is a conservation advocate who accompanies his exhibits with talks about the importance of insects to the stability of Earth's ecosystem. "Botanical gardens are an under-appreciated resource in their communities," he has said. 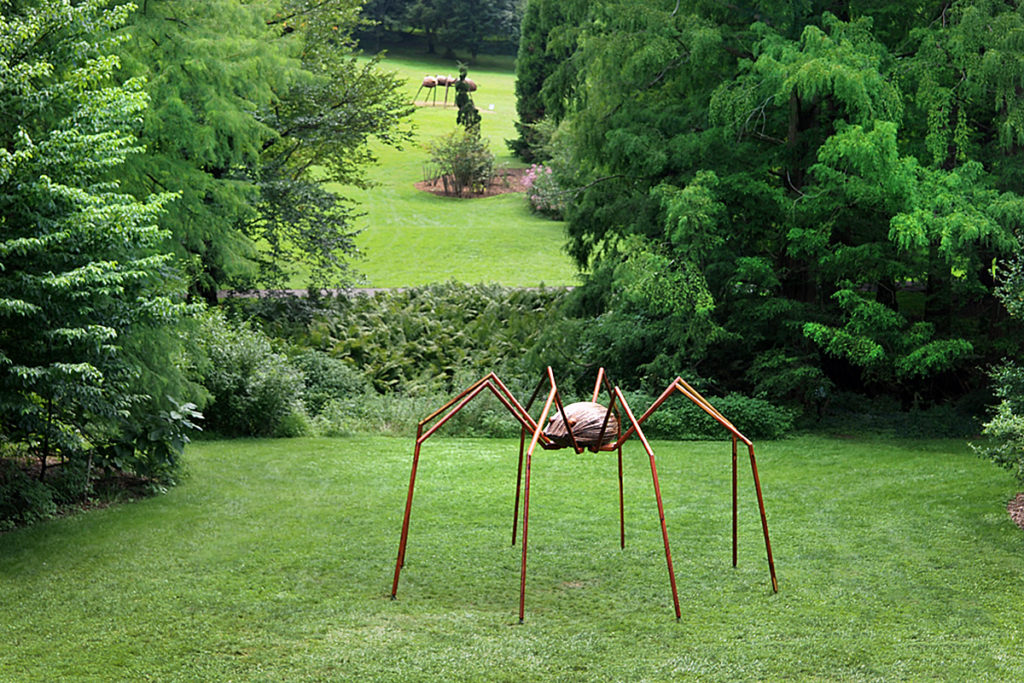 Seen from afar, the 17-foot diameter and 500 pounds of daddy longlegs (above, left) is not so obvious. But it becomes more so up close (above, right) with 17 University of Pennsylvania students gathered beneath it. 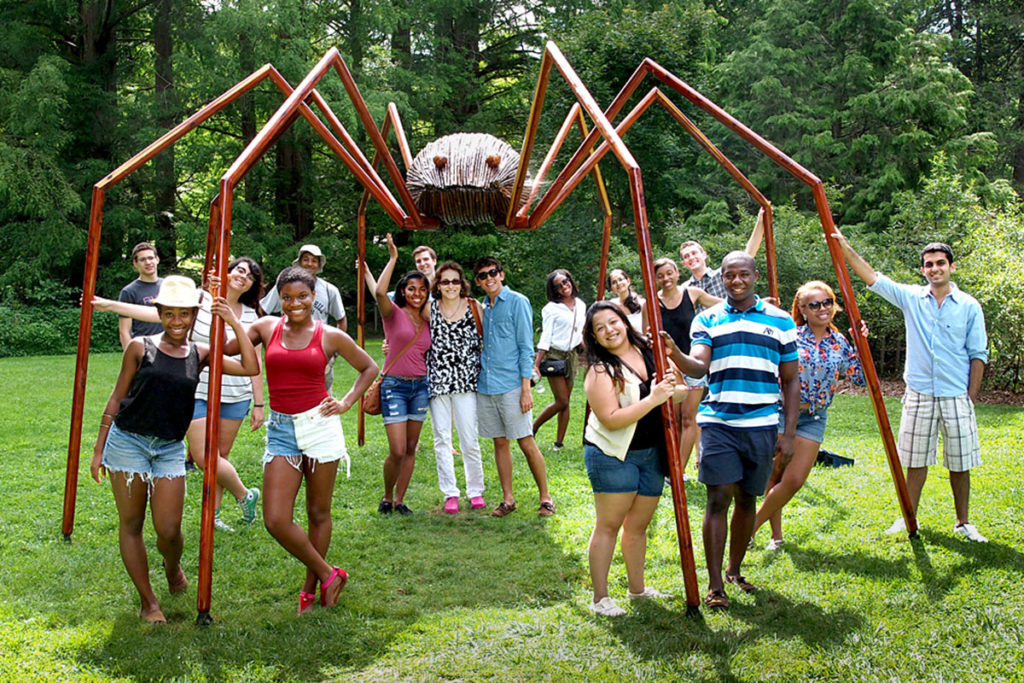 Rogers explained the real epiphany in his work occurred in 1990 when he was visiting a friend in the Green Mountains of Vermont and came across a tree sapling that had been bent low to the ground by ice. Its profile reminded him of nothing so much as the backbone of a dinosaur. It so excited him he began gathering and lashing together other saplings to make a more detailed dinosaur sculpture. Within two years he had switched to making dinosaur-sized insects. 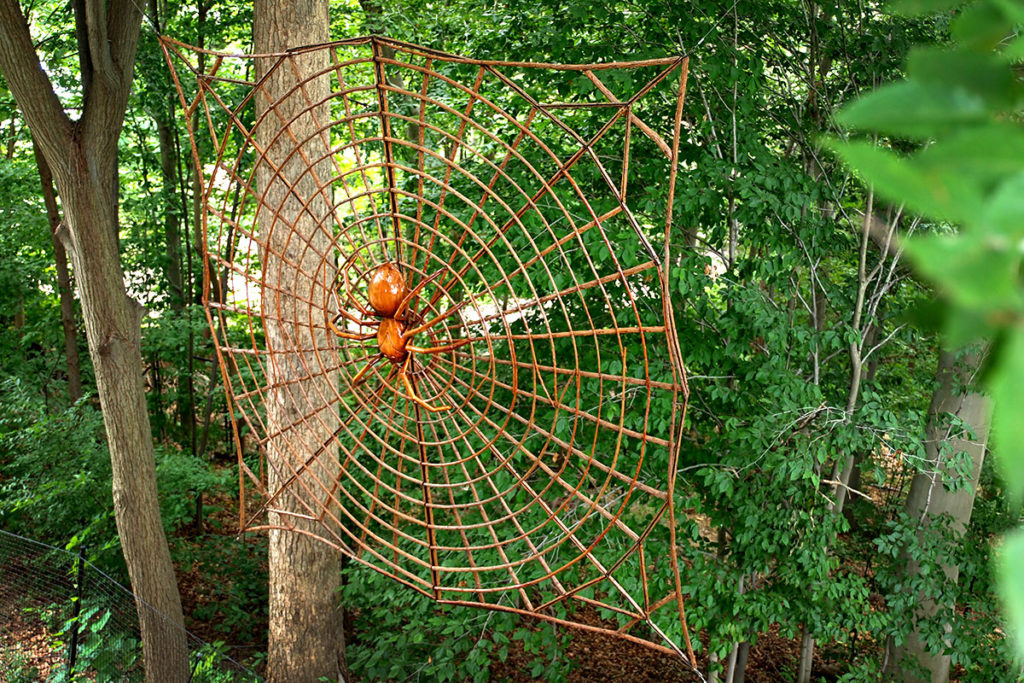 Strung in the trees at the Morris Arboretum, Rogers' spider web stretches 15-feet across with a spider at its center. 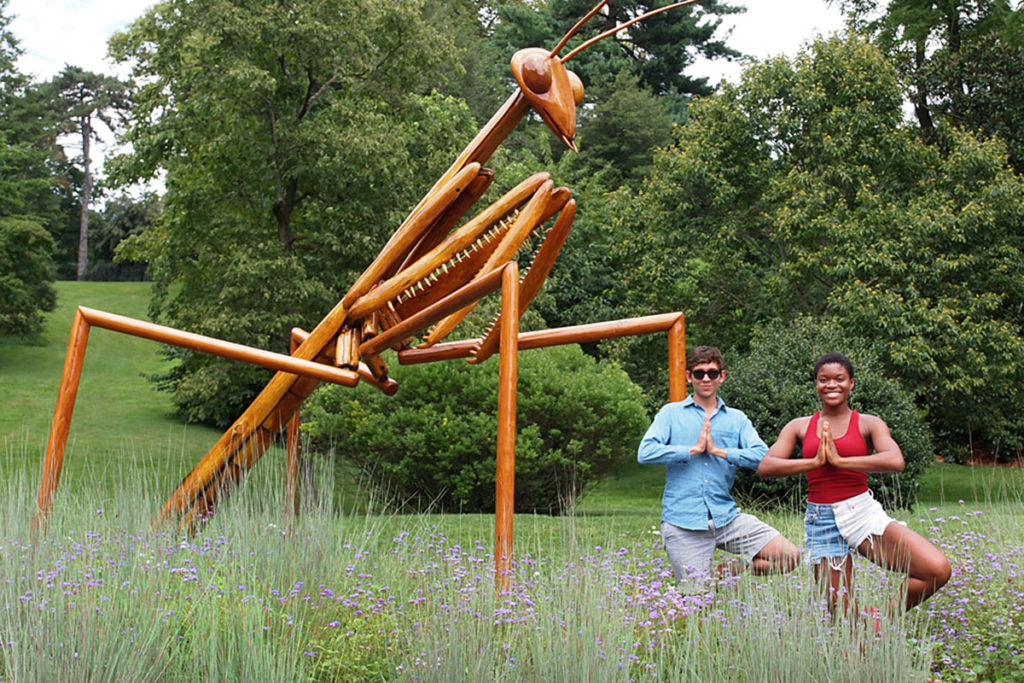