Welcoming visitors to the Chihuly Garden and Glass Museum adjacent to Seattle's most popular tourist attraction is this 30-foot-long sculpture called "Glass Forest."

Seven years ago, glass sculptor Dale Chihuly opened a unique sort of arboretum and museum at the foot of Seattle’s Space Needle. The museum building is a sprawling series of large, darkened galleries punctuated with visually stunning works of illuminated glass, while the outside garden is an other-worldly mix of real and glass plant forms. 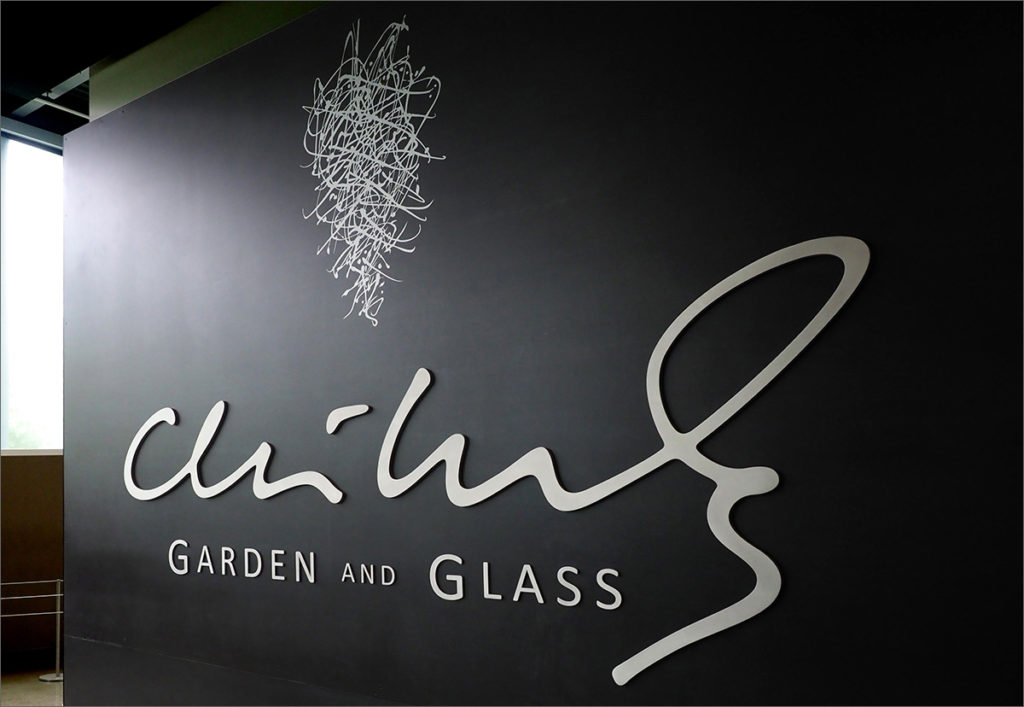 Aside from becoming a sculptor of world renown over the last half-century, Chihuly is also largely responsible for making the Seattle/Tacoma area the current epicenter of American glass art. 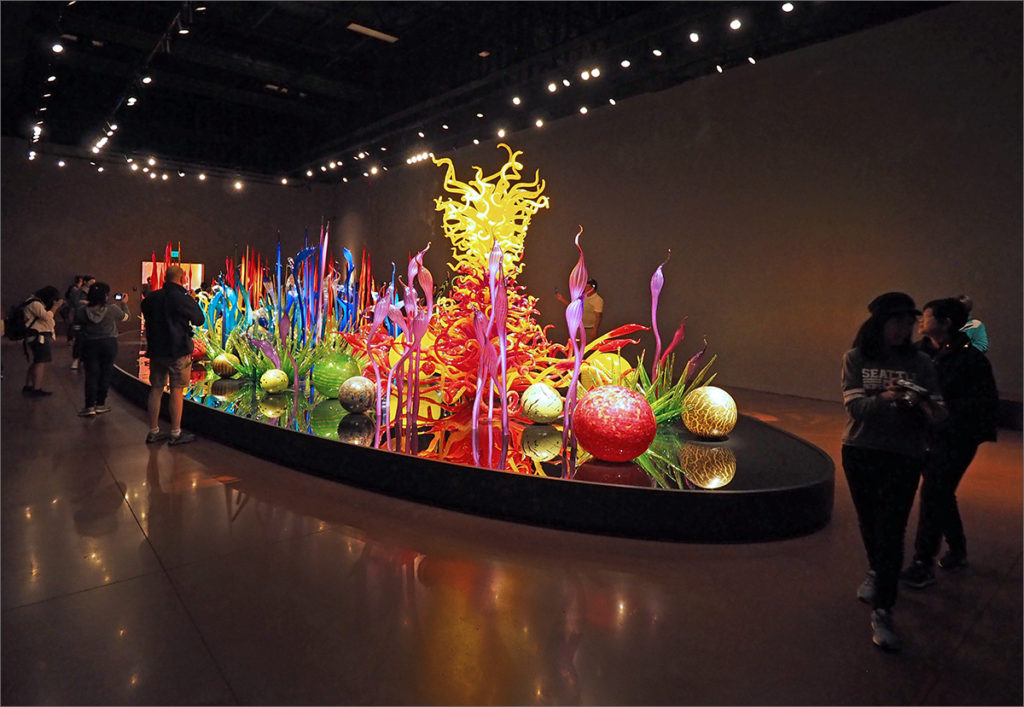 The concept of a "garden" has a number of meanings in this curious place. Some of the inside galleries feature dense, garden-like displays of glass sculpture resembling crystalline plants and flowers. 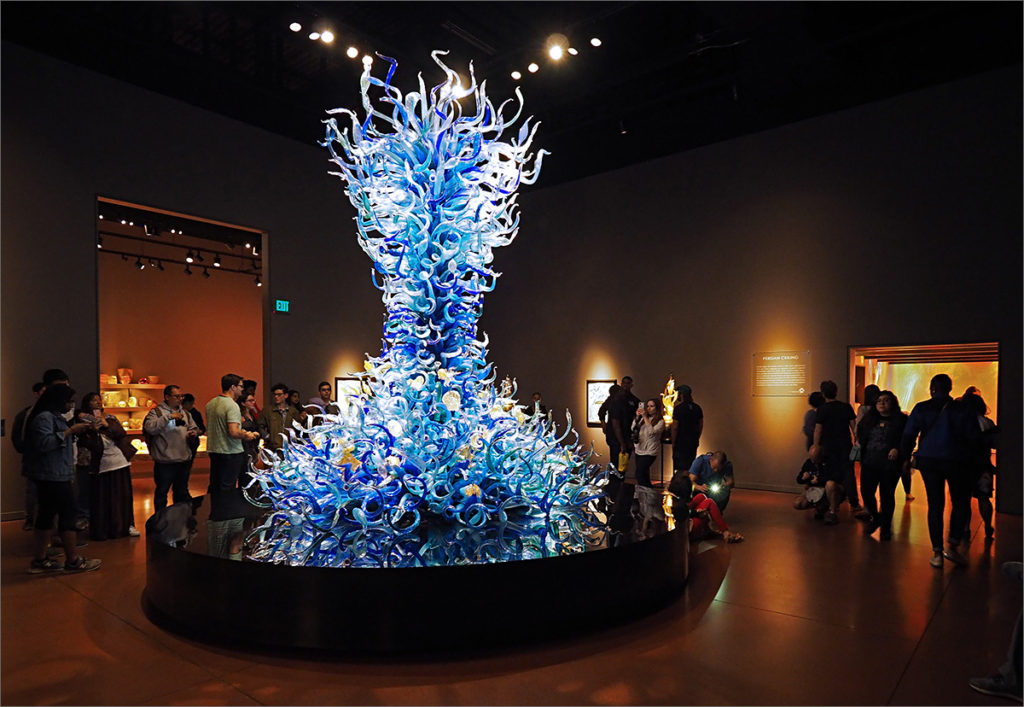 Similar to Claes Oldenburg in steel, Chihuly's specialty is massive artistic constructions or "glasscapes" like this one in the "Sea Life" gallery, two stories high. 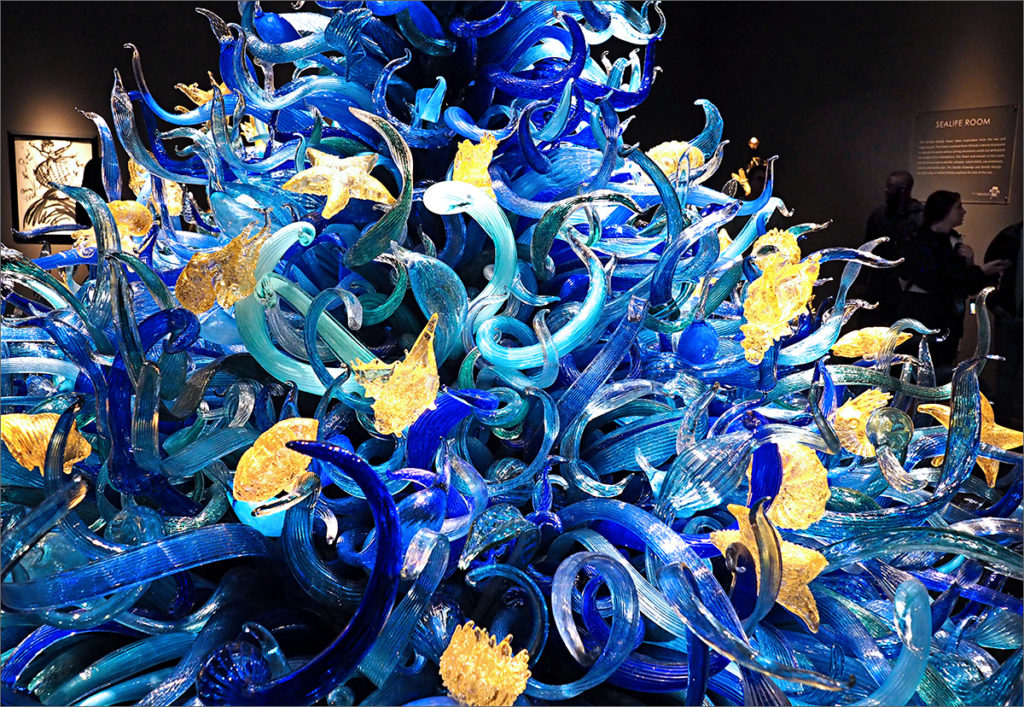 Made of thousands of individual blown-glass structures that look like blue tentacles, the piece is studded with smaller yellow and green elements suggestive of starfish, sea urchins and mollusk-like creatures. 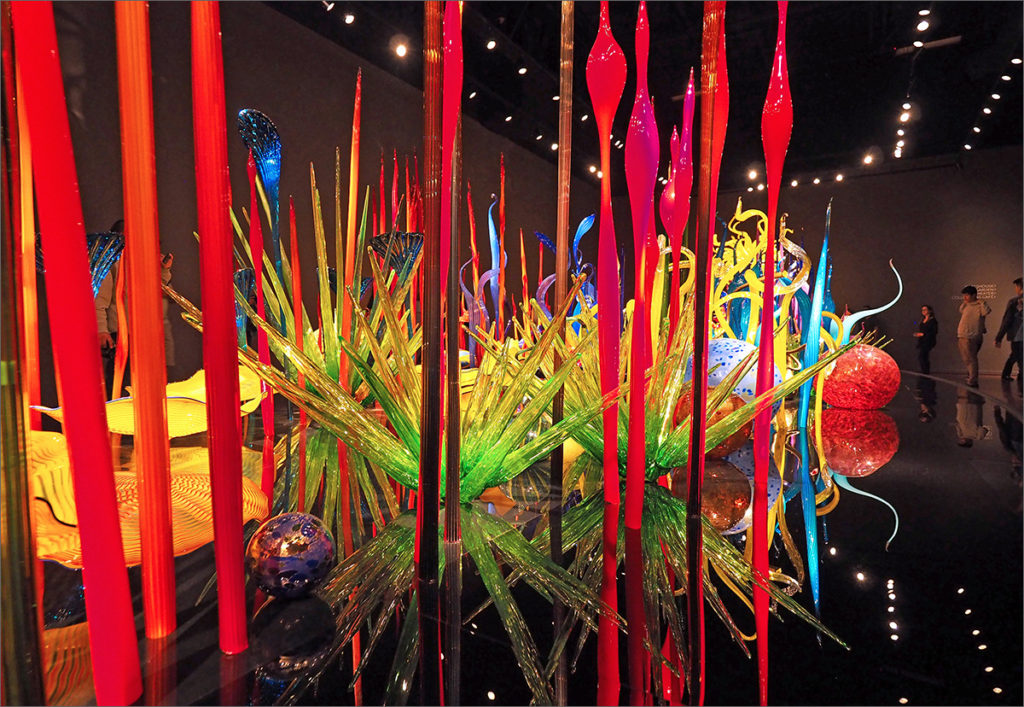 The museum's galleries tend to create a feeling of sensory overload made all the more amazing by the knowledge that every single detail was blown from molten glass. 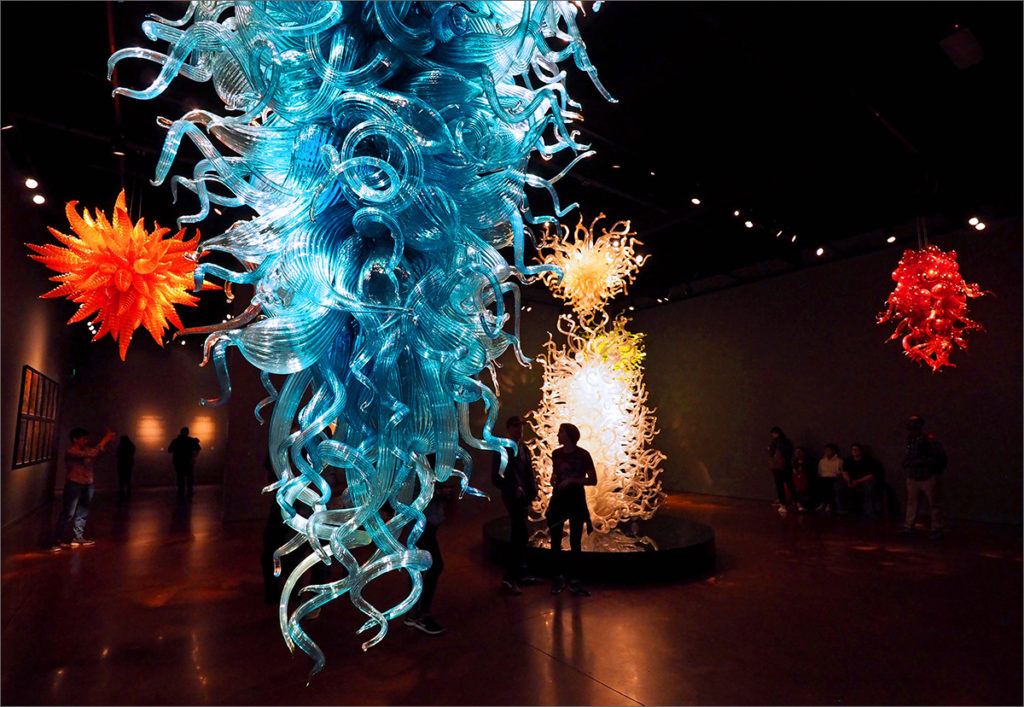 Born in Tacoma where he first encountered glass blowing at the age of 20, Chihuly later earned a Master of Science degree at the University of Wisconsin-Madison and a Master of Fine Arts at the Rhode Island School of Design. 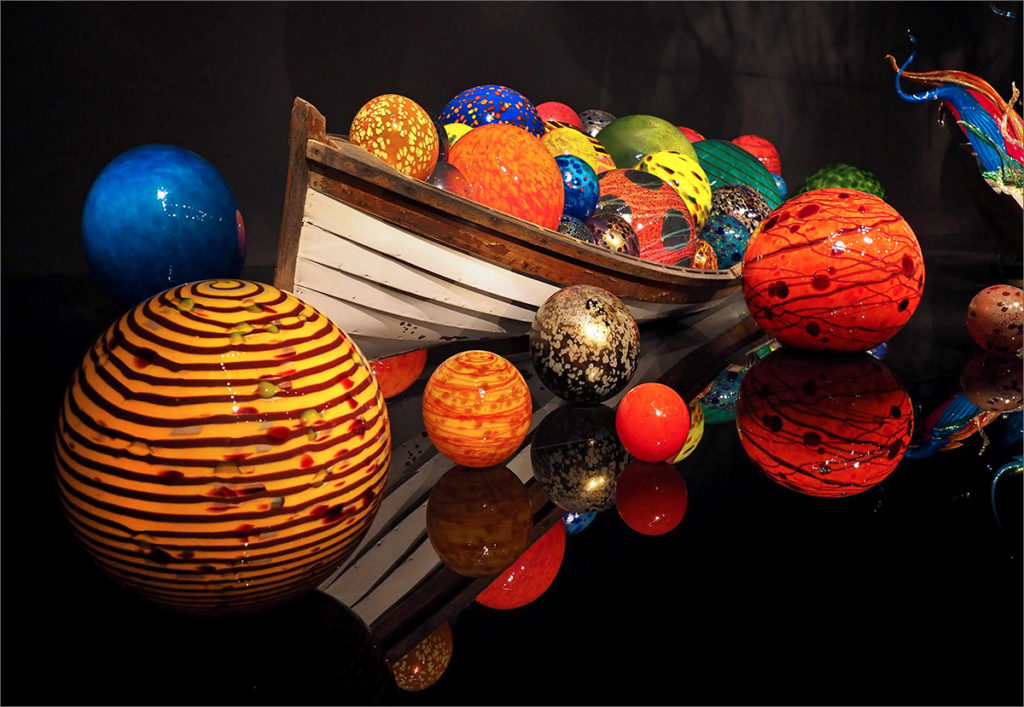 Chihuly lived and studied with the glass masters on the Venetian island of Murano where glassmaking first evolved into a high art in medieval times. His travels are reflected in his work, like this boat scene inspired by Japanese fishing floats. 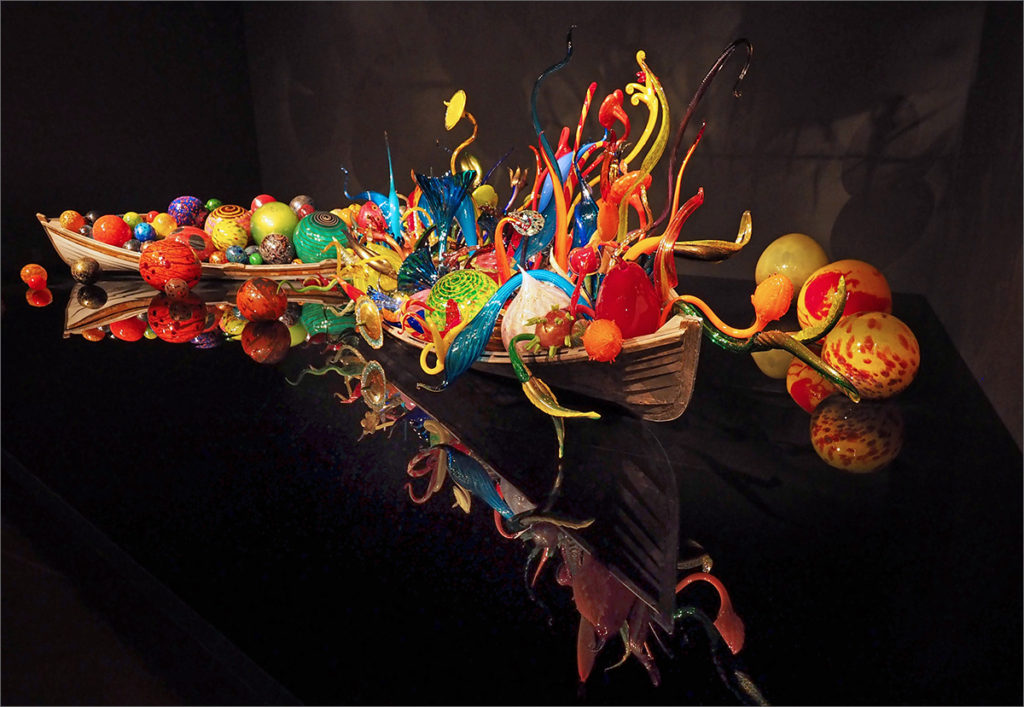 A sense of the full dimensions of this complete display is provided by the two real-life fishing boats. 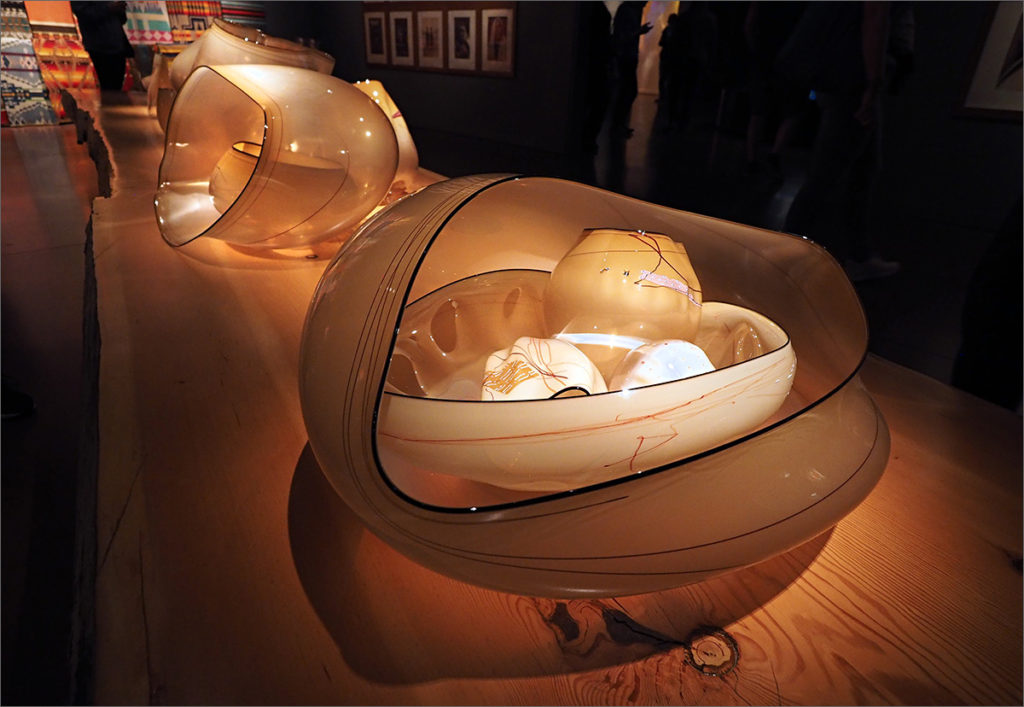 His museum and art also art pay homage to Native American culture and history in the Northwest. Some of his work is heavily influenced by Northwestern tribal basketry, pottery and textile arts. 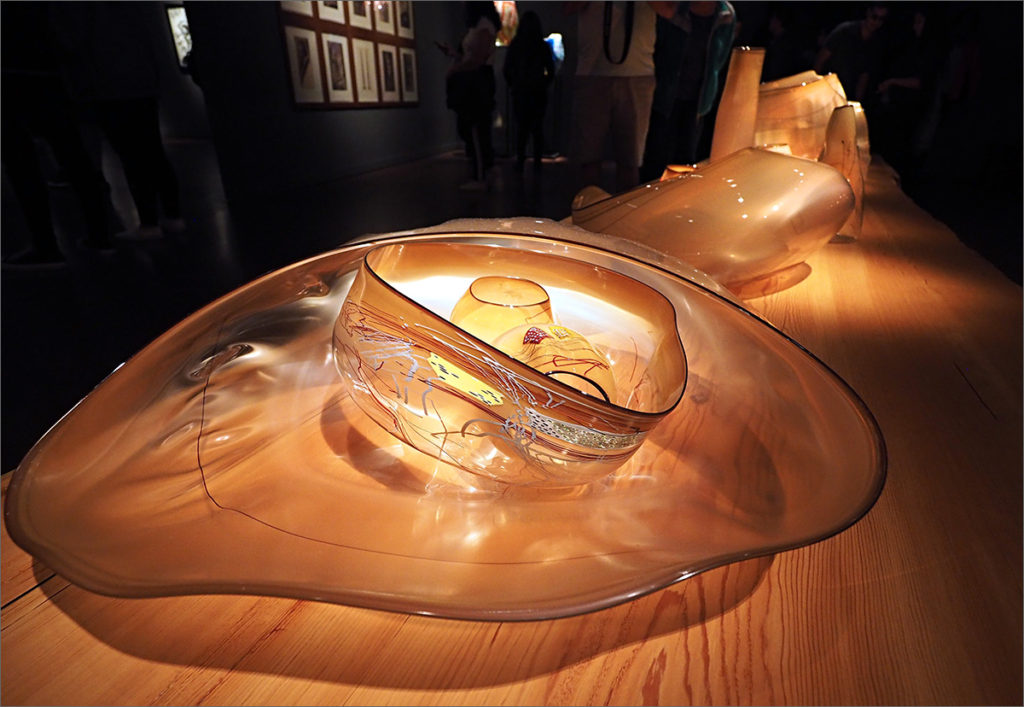 The rigid shapes are even able to capture the sense of how larger Indian baskets fluidly bend. Chihuly is credited with greatly expanding the artistry of what is possible in blown glass. 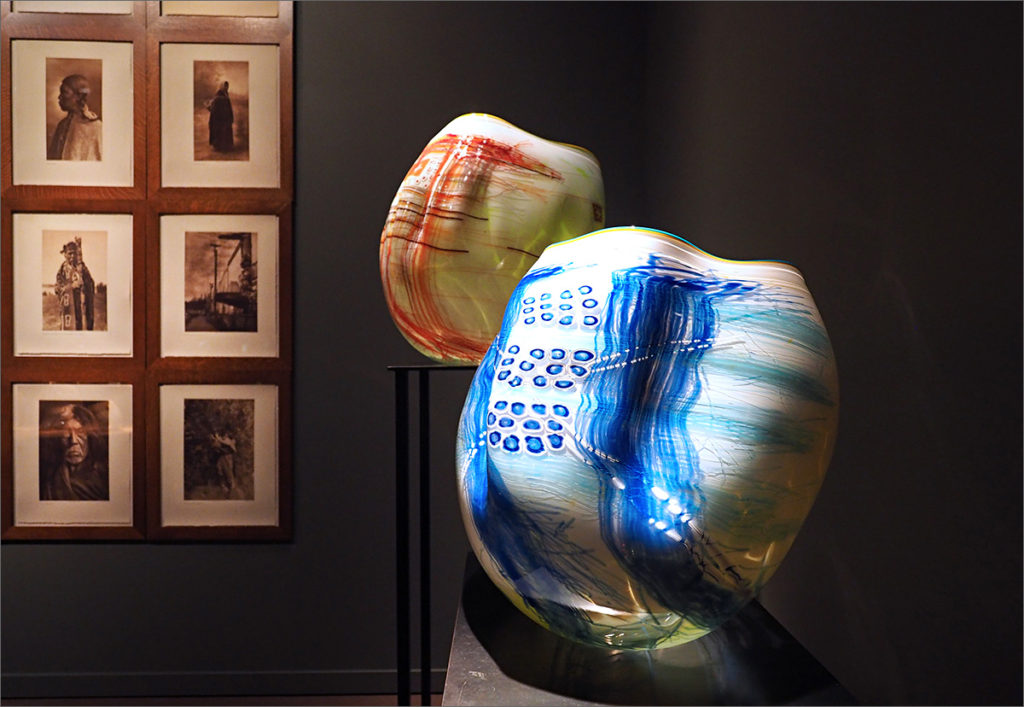 These glass pieces were inspired by tribal baskets; the photos behind are part of a Chihuly collection of early 20th century images by Edward Curtis who photographed regional tribes. 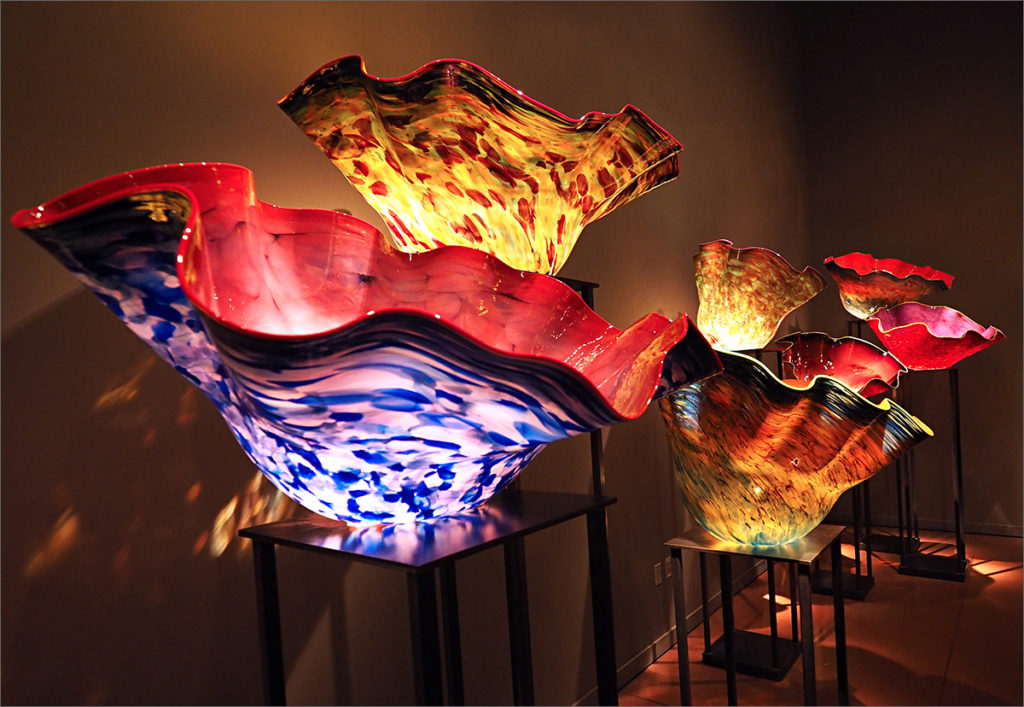 One of the Chihuly's most prolific forms is the richly colored "Macchia bowl," a term derived from the Italian word for "spotted" or "stained," as well as the name of an ethereal form of medieval Venetian painting. 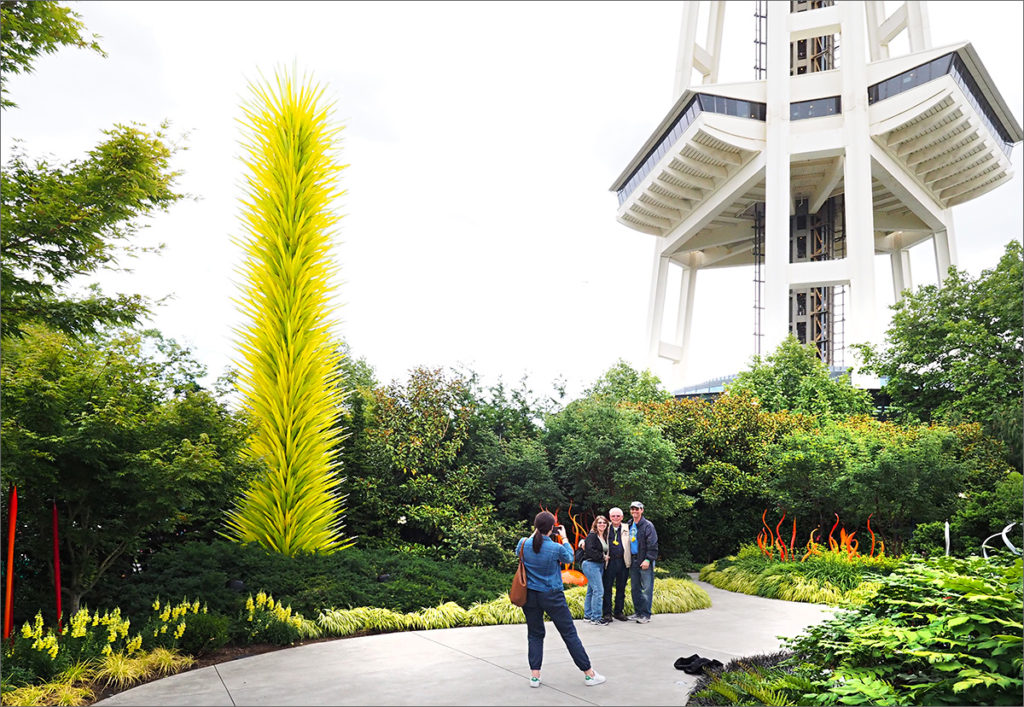 Outside the museum is an expansive botanical park in which glass works and real plants are mixed together. The yellow tree is two stories high. In the background is the base of the Space Needle. 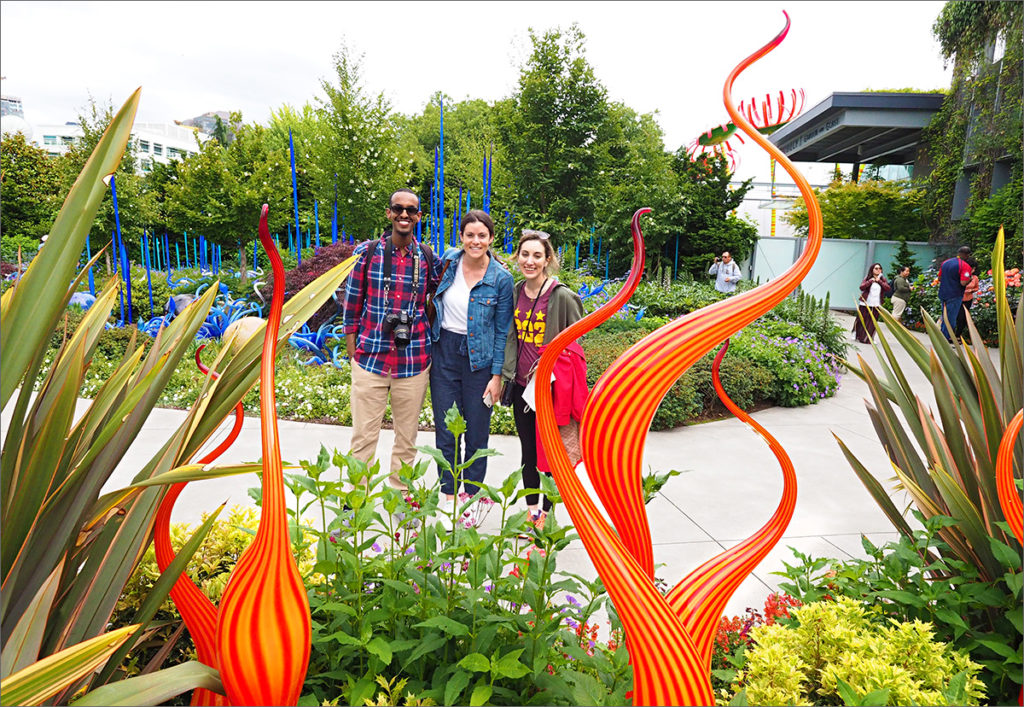 Visitors wander the paths through what often resembles the flora of some alien planet. 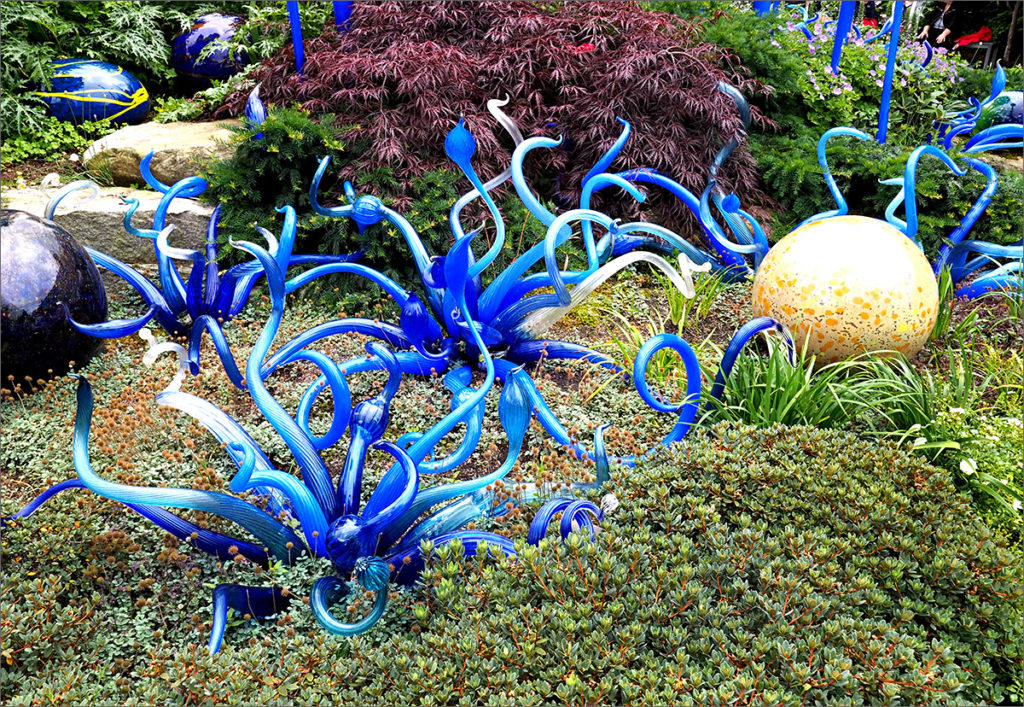 Like many of his other works, the pieces in Chihuly's garden park consists of consist of dozens of individually-blown glass assembled into the final sculpture. 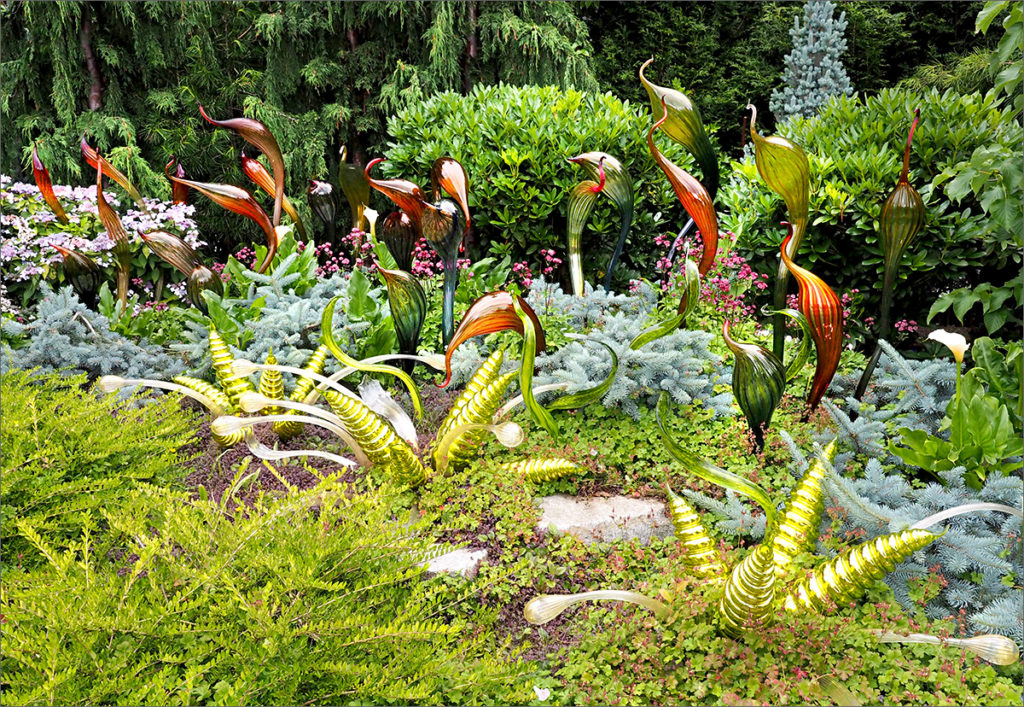 Covering an acre, the garden includes eye-catching displays around every curve. Here, a flock of glass birds appears to have roosted. 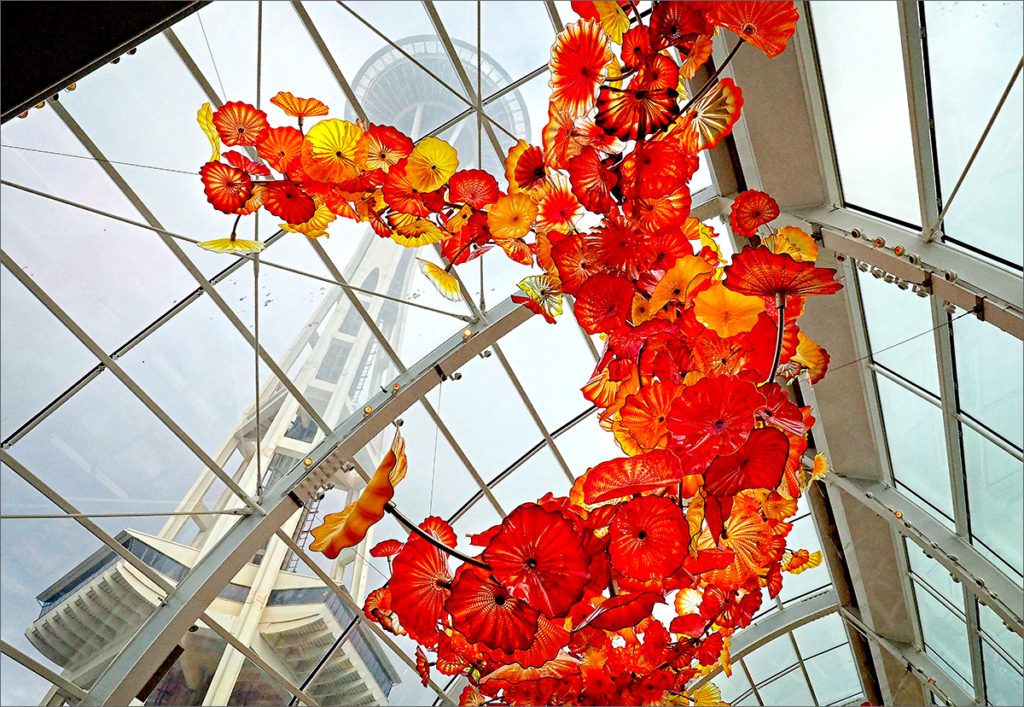 The Museum's "Glass House" sits directly under the Space Needle that dominates the view through its transparent roof. The giant red, orange and yellow glass flowers are a hanging sculpture. 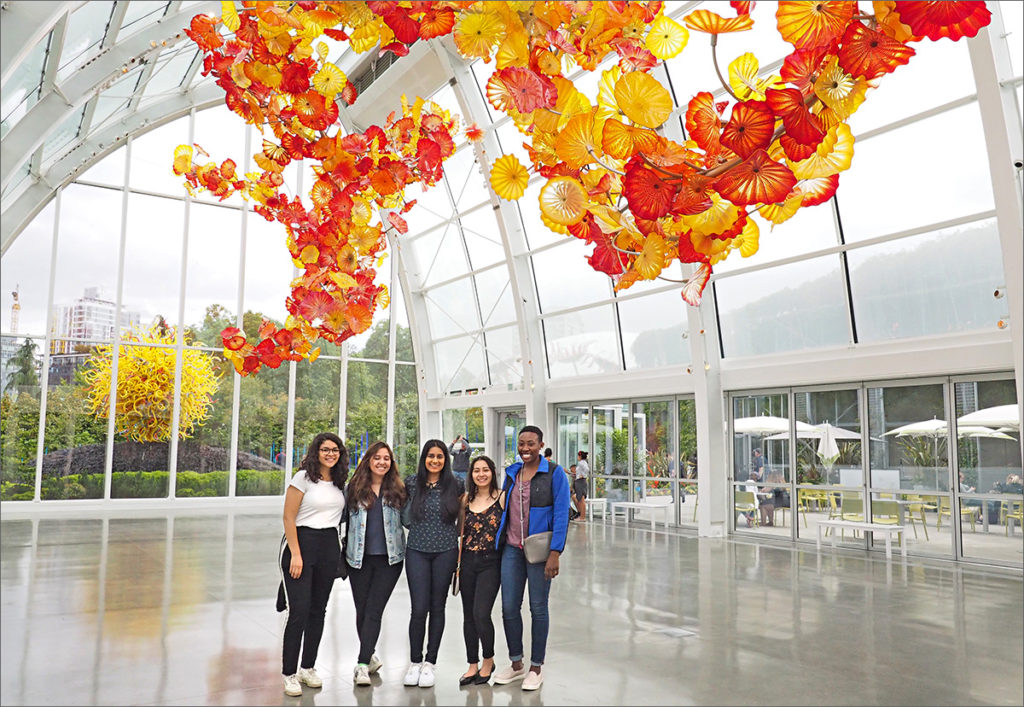 The Glass House is frequently used for weddings, yoga lessons, corporate gatherings and other public activities. Here, visitors pose for their photo op in the wonderfully diffuse lighting of the space.