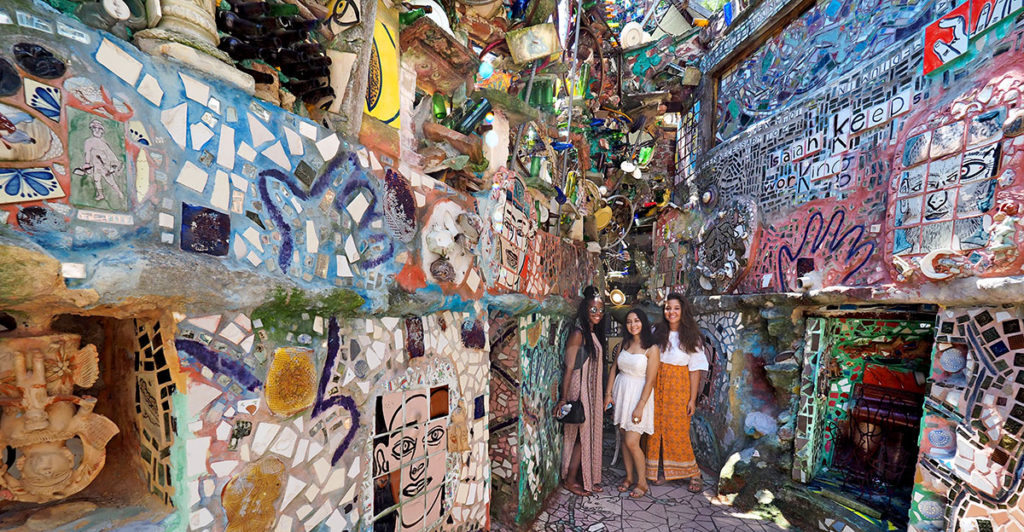 Philadelphia's Magic Gardens is a unique, multi-level, walk-through artistic experience. Exploring one of its many wildly decorated spaces are Safa Browne of the University of Pennsylvania, Tania Calle of Williams College and Zara Wermers of Tufts University.

Philadelphia’s nineteen-year-old Magic Gardens is a sprawling, multi-level work of outsider art by Isaiah Zagar executed across a space that once held three row homes. Architectural in size with fantastical interior shapes, every inch of every surface — floors, walls, ceilings — is covered in mosaics made from individual ceramic artworks along with assemblies of rusted bicycle wheels, colored bottles, smashed and whole kitchen china, shards of mirror, twists of iron and other odd and ends of folk art and industrial debris. 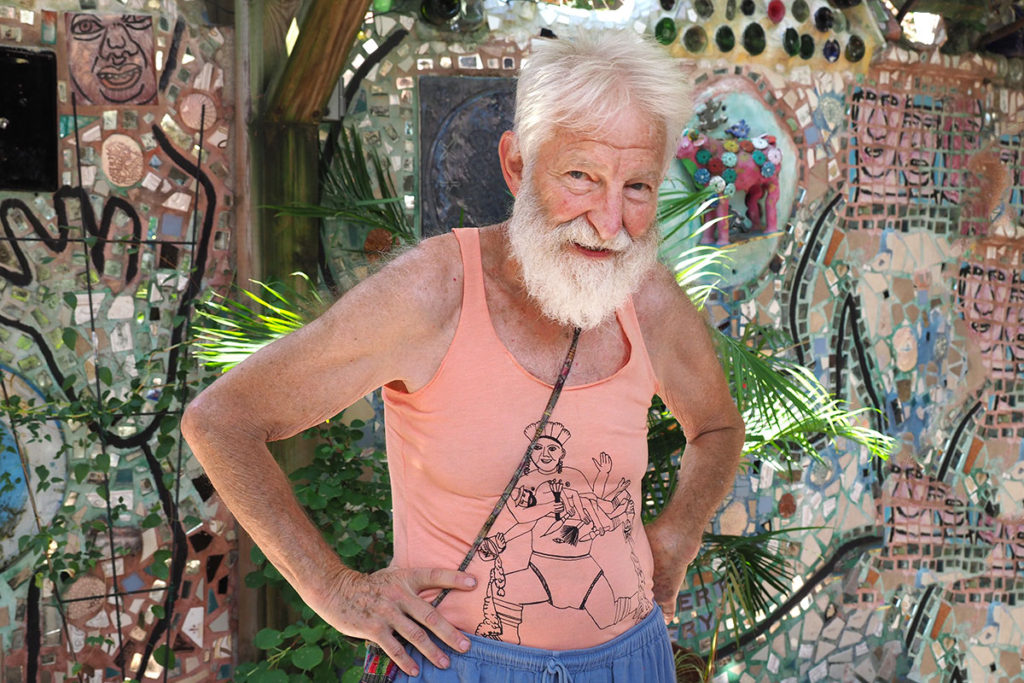 Often on hand to regale visitors with tales of his colorful career is 80-year-old Isaiah Zagar, a formally trained fine artist (Pratt Institute) who went on to become one of the country's most acclaimed mosaic masters. 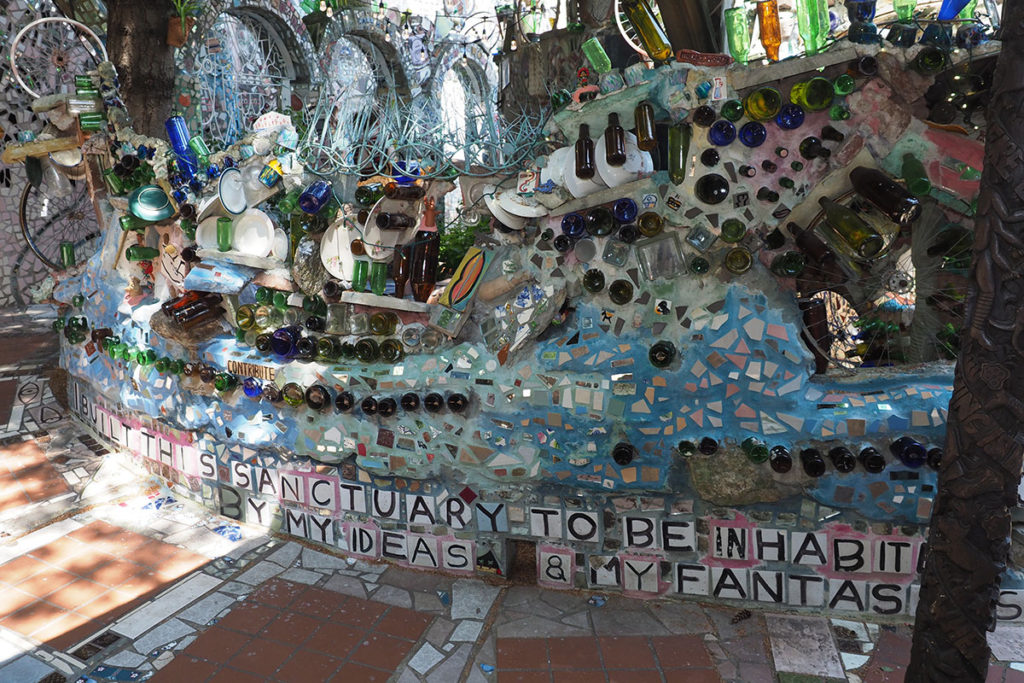 One twelve-foot section of interior wall contain's Zagar's declaration of the purpose and goal of his massive work of concrete and found objects: "I Built This Sanctuary to be inhabited by my ideas and my fantasies." 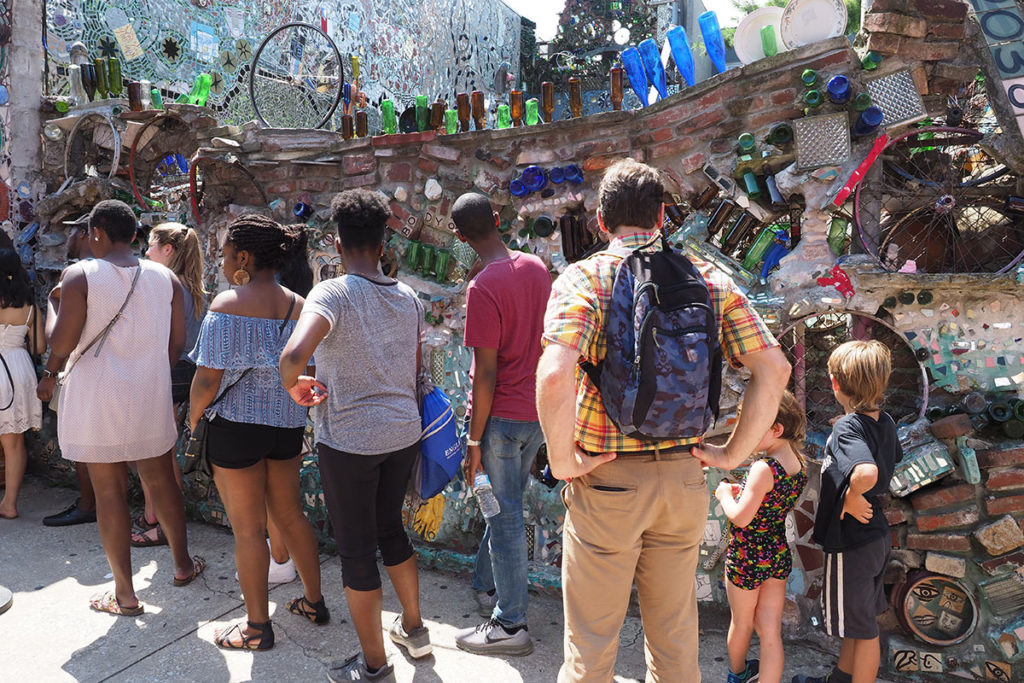 A major Philadelphia tourist site, the facility draws busloads of visitors. On good weather days (much of the maze-like structure is open to the sky and elements) they begin lining up along its junk-art sidewalk wall. 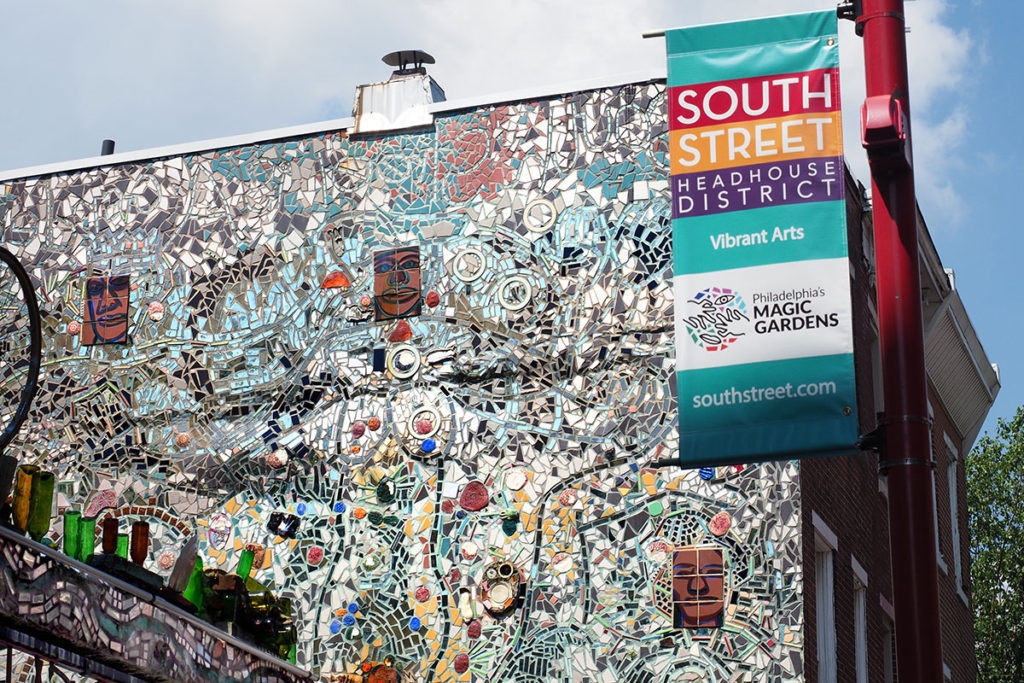 The site is part of Philadelphia's South Street District that, over the last 50 years, evolved from being inner-city wasteland to a commercially viable and often zany celebration of local culture and arts. 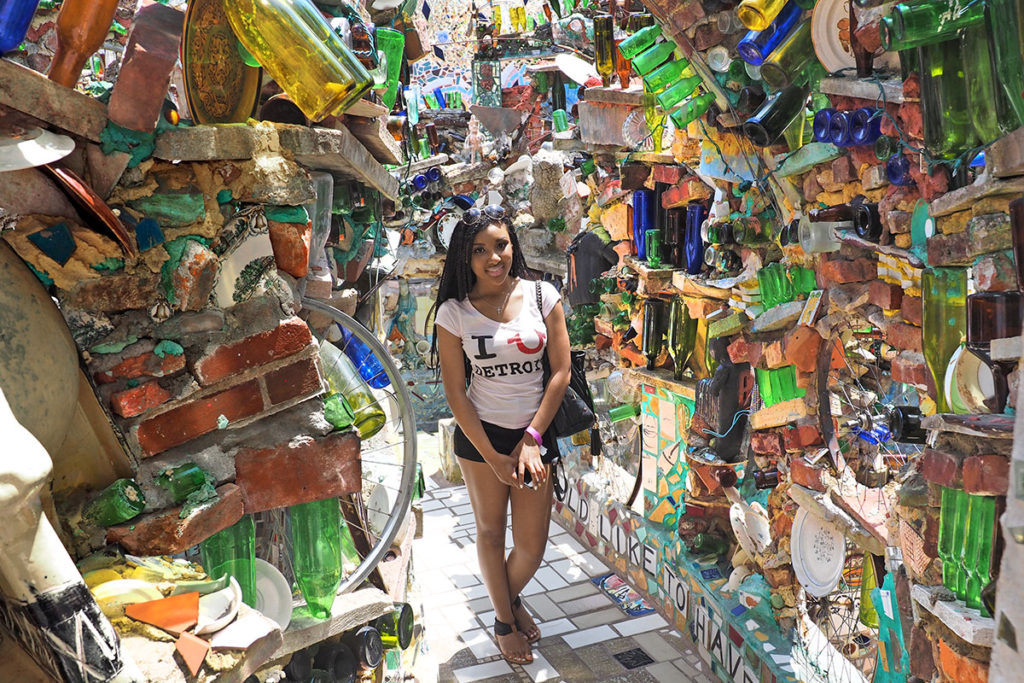 Shanarra Turner, a student from the University of Michigan, wanders through one of the tunnels of three-dimensional artistic clutter. 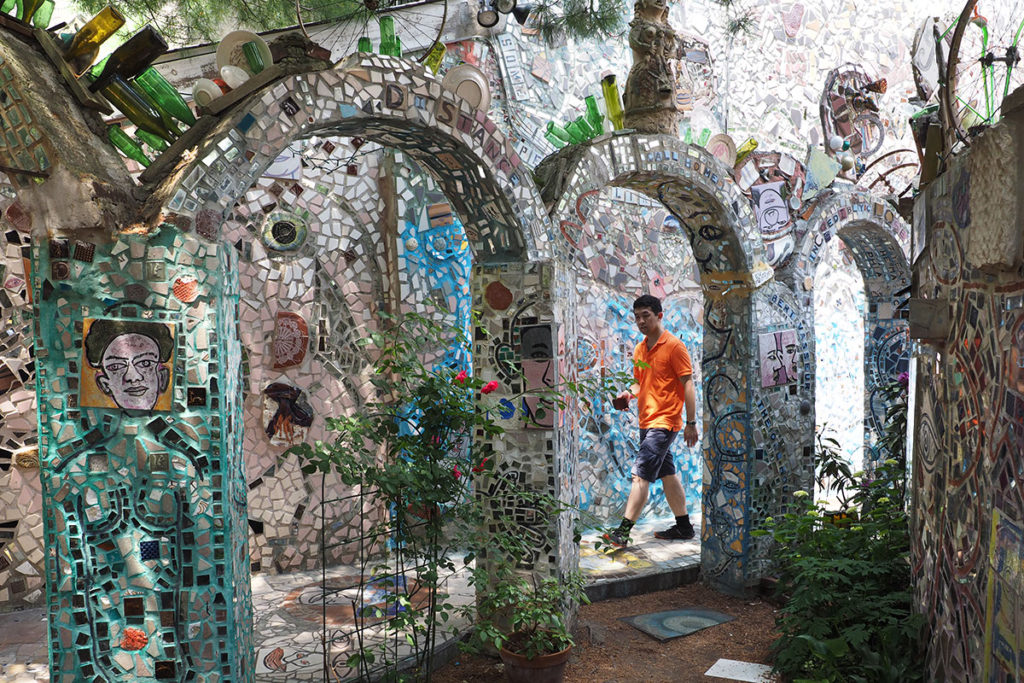 Another visitor passes through the arches where tens of thousands of mirror shards cover every surface, creating different light effects throughout the day. 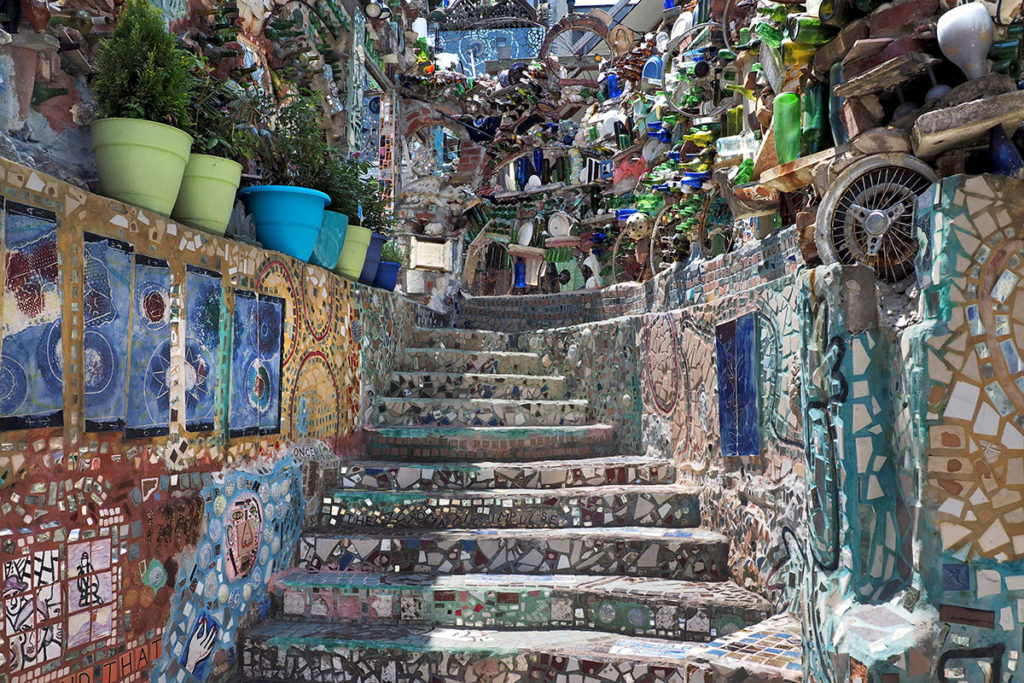 The largest and most ornate of the several stairways throughout the structure leads to the lower labyrinthine area that was once the basement of two row homes. 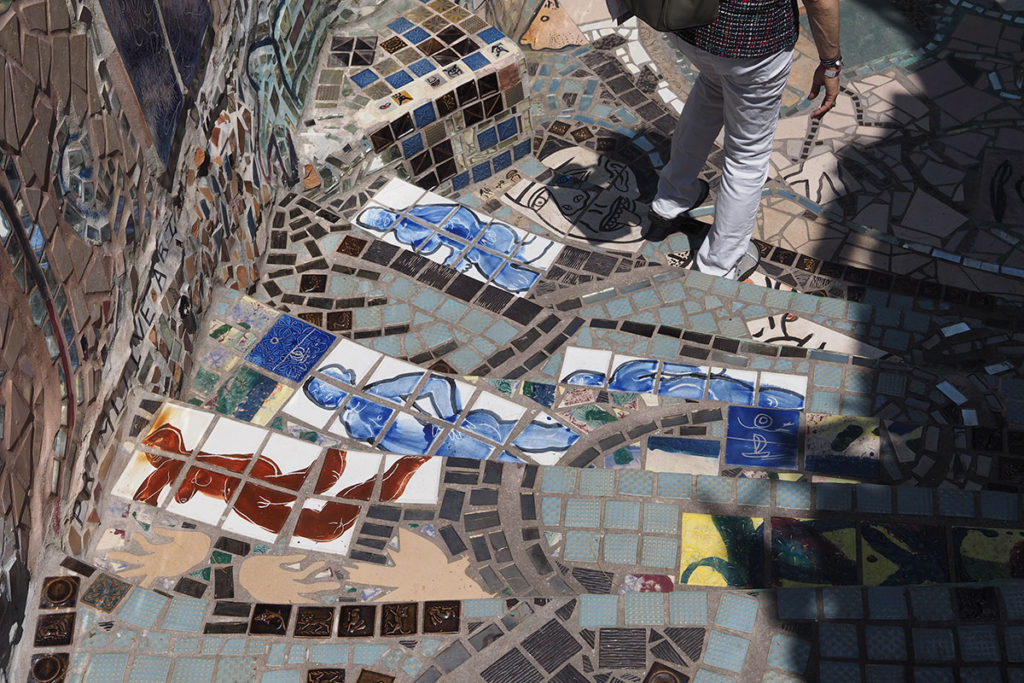 A view from the top of the main stairway reveals the mosaics and ceramic art that cover the stairs. 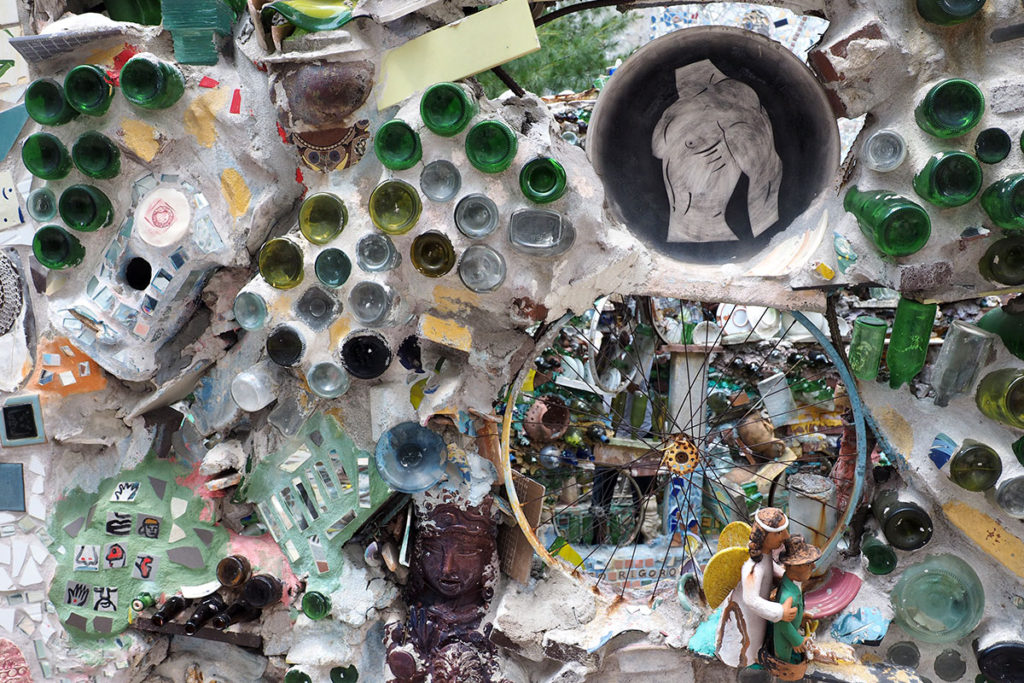 Part of a story-high wall features a "bicycle wheel window" to an inner courtyard. 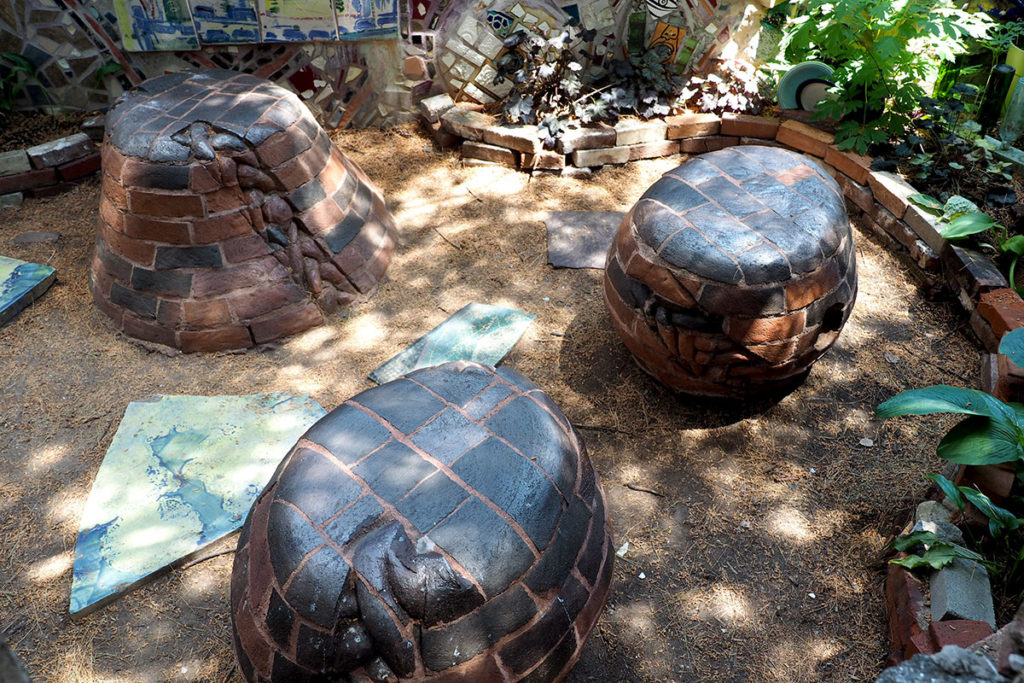 This is a quiet nook where visitors can relax on ceramic seats as they contemplate their experience.

In 1968, after a stint with the Peace Corps in Peru, Zagar and his wife, Julia, moved to the then-dilapidated, low-rent neighborhood of South Street in Philadelphia, opening a shop for South American folk art. 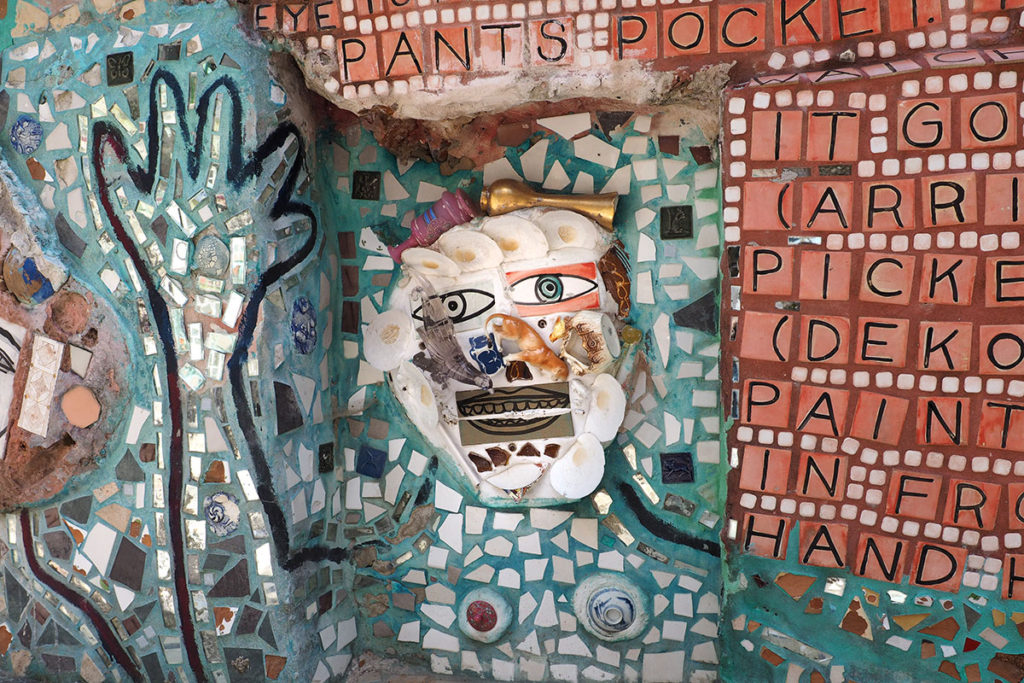 After opening the Eyes Gallery on South Street in 1968, Zagar began creating an attention-getting mosaic on the front of the shop; it was the first of what would ultimately become hundreds of mosaic art works on Philadelphia buildings. 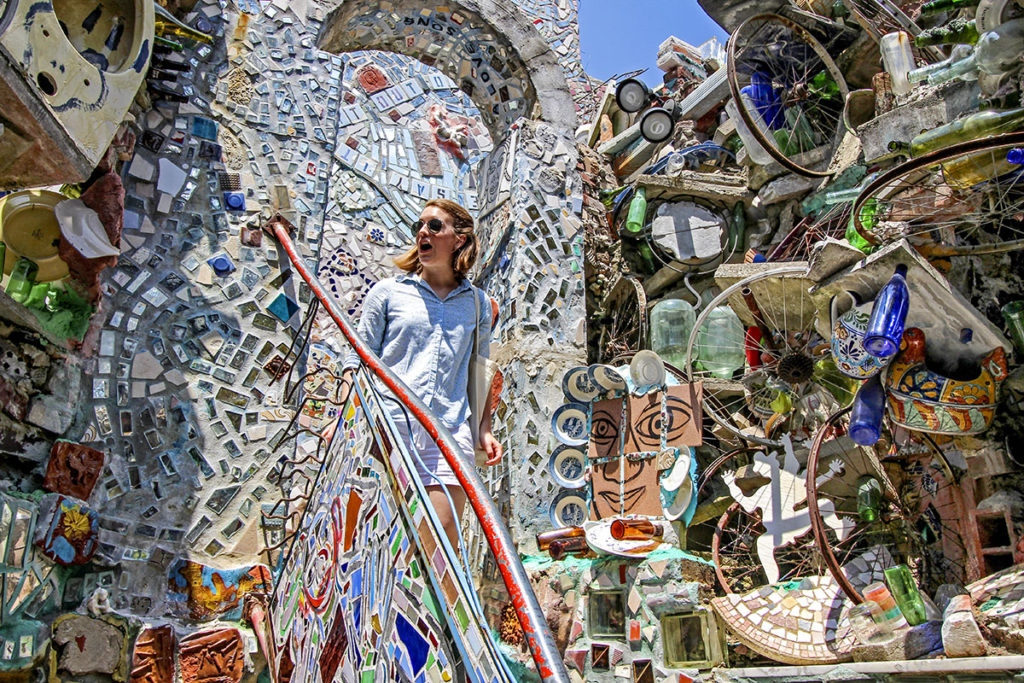 It took Zagar twenty years to build the entire Gardens that consumed enormous quantities of cement and put his skills as a ceramic artist, graphic artist, self-taught architect and highly productive dumpster diver to good use. 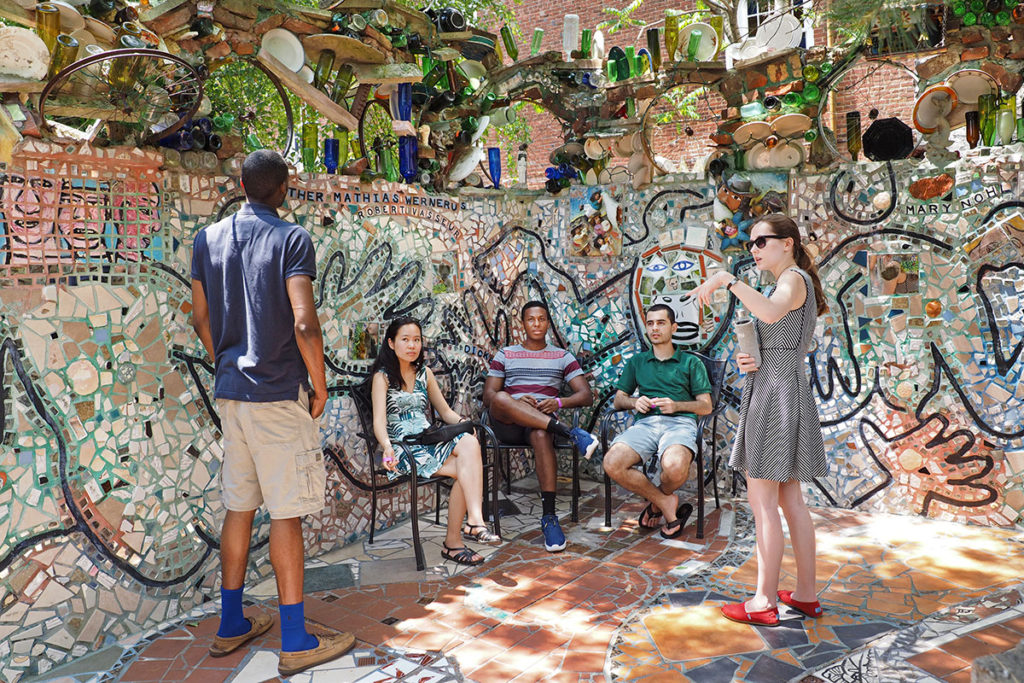 It what serves as the main courtyard of the the Magic Gardens, a docent (red shoes) explains the overall structure to a group of student tourists. 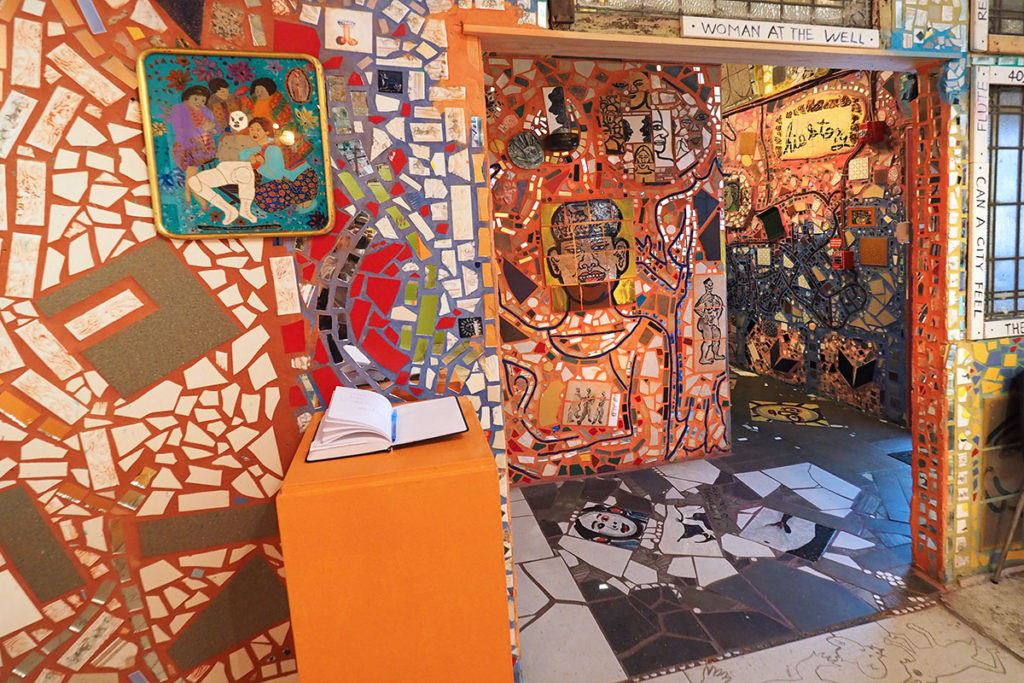 In a dramatic change of color palette, this area of wild oranges and reds is part of the art gallery and meeting spaces in the closed-in row home structure that anchors one end of the Gardens. 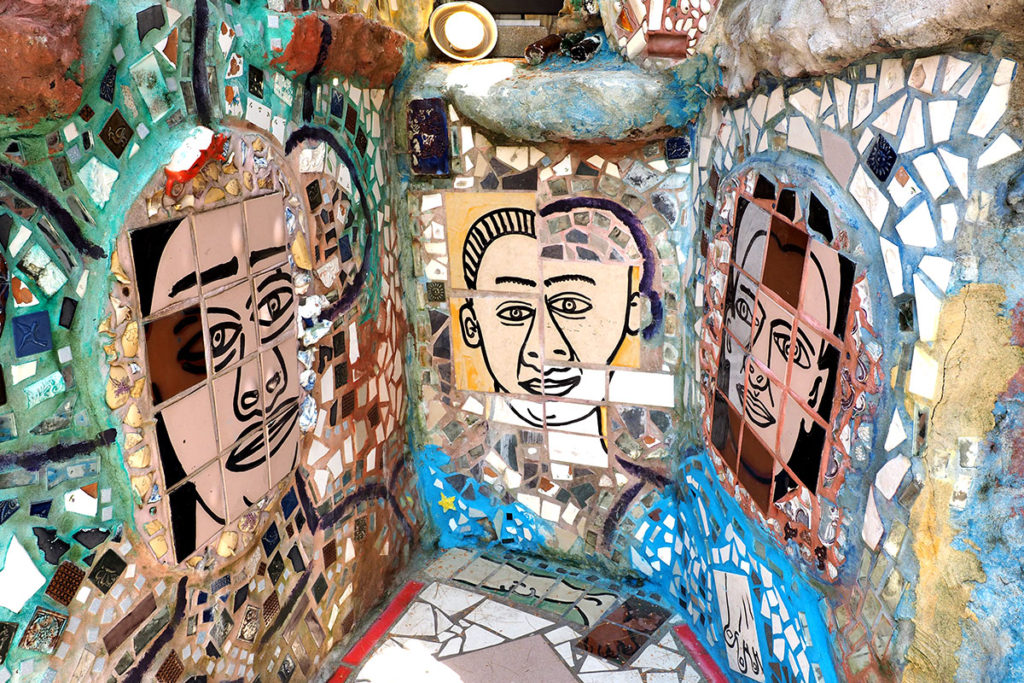 The many portraits embedded in the walls are of real people, either artists Zagar admires, artists that he works with or other peolple who have played some role in his life and work. 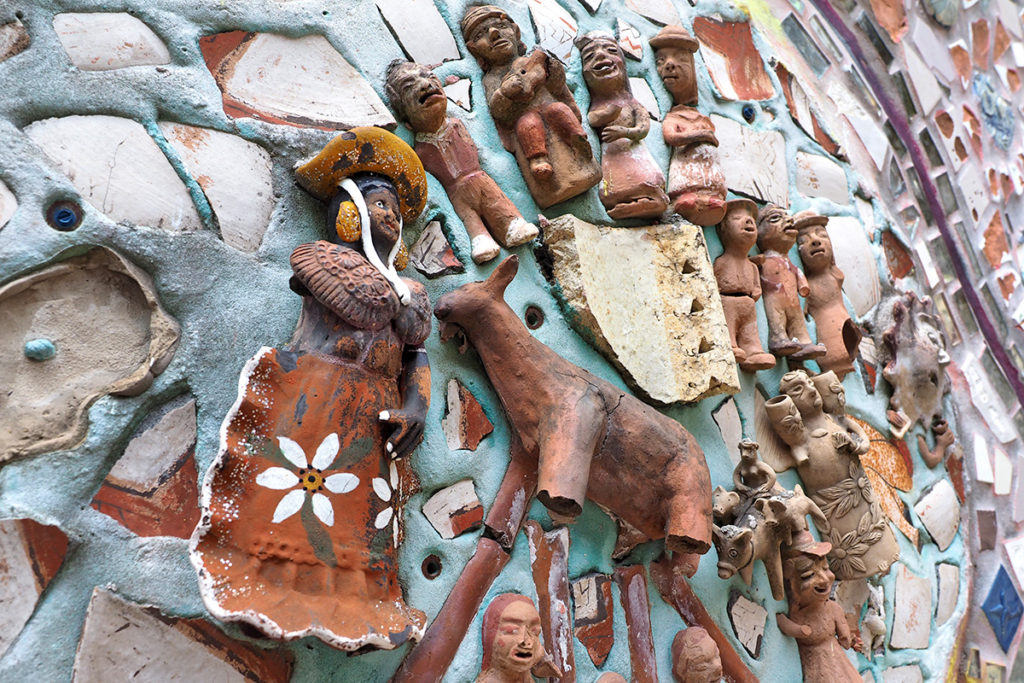 Zagar and his wife's Eyes Gallery are still in the South American folk art business with a good deal of their imports have ending up in the Garden's walls. 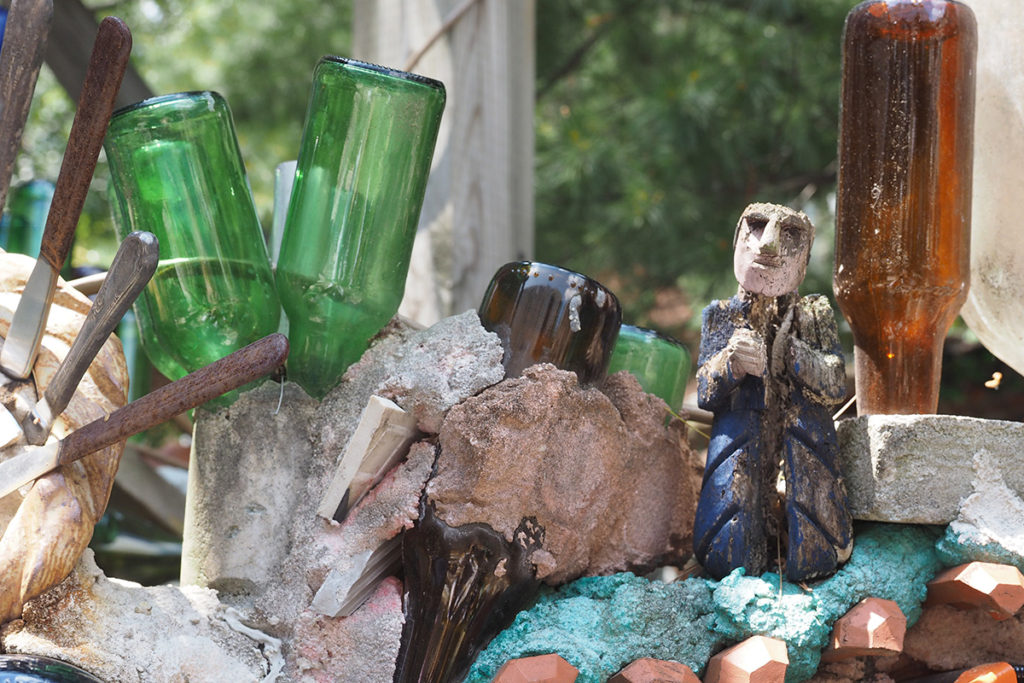 Zagar's Magic Gardens began in 1994. It owes its existence to a teenage experience Zagar had as a young artist visiting the mountainside outsider art mansion of Clarence Schmidt in Woodstock, New York. The creative kinship can be recognized in photos of the late Schmidt's site. 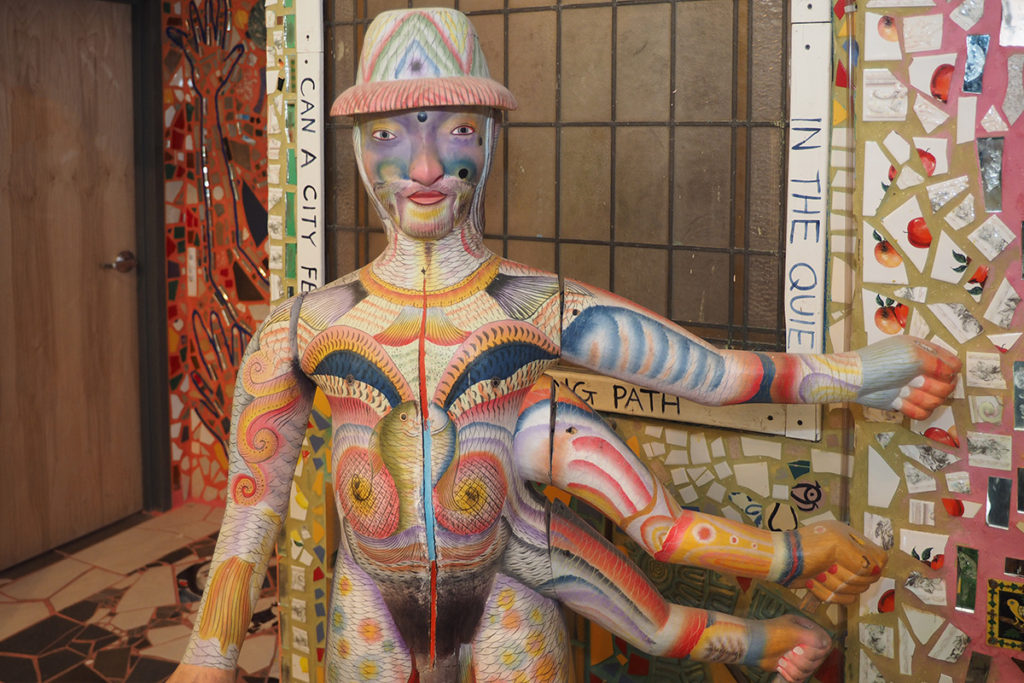 Aside from being a tourist site, the actual converted rowhouse that anchors one end of the Gardens is fitted out as an art gallery with a constantly changing series of exhibits by both local and national artists. 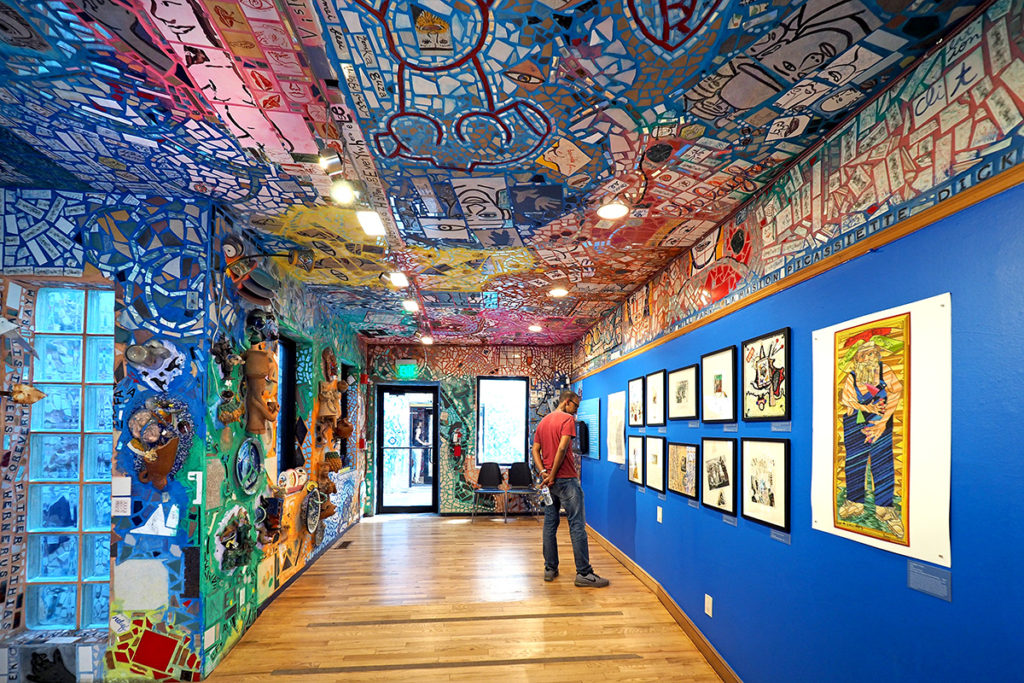 Also a community site, the Gardens hosts a wide range of gatherings and celebrations, along with educational sessions for budding artists interested in exploring the mechanics and aesthetics of creating architectural and other kinds of mosaic works.